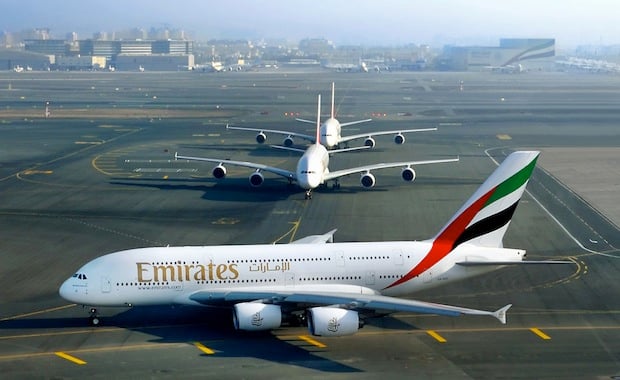 Dubai airline Emirates will operate its flagship Airbus A380 jet on all its three daily services to the Australian city of Melbourne from next year.

The Emirates A380 offers 489 seats in a three-class cabin configuration with 14 private suites in first class, 76 business class seats and 399 economy seats.

The move will add 945 seats per week to Melbourne, representing a 10 per cent increase in capacity, a statement said.

The additional weekly seats on the route will “support more business and leisure travel” between Dubai and Melbourne.

Melbourne was Emirates’ first Australian destination, when the airline started flights with a three-times-weekly service in 1996. Currently, along with 21 weekly flights to Melbourne – two non-stop to Dubai, and one via Singapore – Emirates also operates a daily service between Melbourne and Auckland, the only A380 service operating between the two cities.

Emirates’ deployment of the A380 on its third daily service to Melbourne will also coincide with the dropping of the Melbourne-Dubai-London route by partner Qantas.

Qantas announced on Thursday that instead introduce the Melbourne-Perth-London route from March 24, 2018.

The move comes after Australia confirmed earlier this month that passengers travelling on direct flights from the UAE and Qatar will face additional screening, especially of electronic devices.

The additional security check came after the US and the UK announced a ban on laptops and other large electronic devices in the cabins of flights from certain countries.

Qantas’ new service, to be operated on a Boeing 787 Dreamliner, will reduce travel time for passengers from Melbourne to the UK by more than an hour, it said.

“With a faster flying time and quicker connections in Perth, customers travelling to London from Melbourne will reduce their total travel time by more than an hour compared with existing Qantas A380 services.”

Qantas’ A380 jets currently operating Melbourne-Dubai-London will be redeployed “to meet periods of high demand from Melbourne and Sydney to destinations in Asia, such as Singapore and Hong Kong”, the airline added.