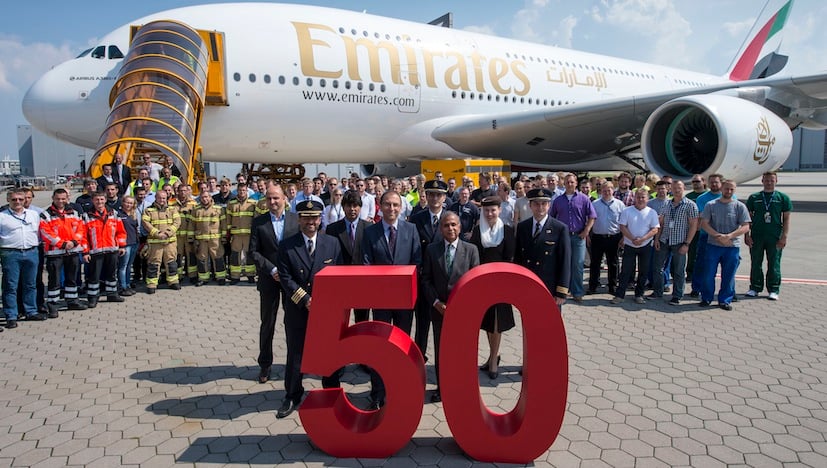 Emirates has received its 50th A380 aircraft, which is due to enter service early August.

As the largest operator of the double-decker aircraft and B777s, the latest delivery swells the airline’s widebody fleet to 224 aircraft, and 90 more A380s on the airline’s order books.

Sir Tim Clark, President of Emirates Airline, said its A380s have generated strong customer interest and high seat factors “wherever we’ve deployed the aircraft” and they currently fly to 27 airports.

“The A380 has helped us serve customer demand on trunk routes, operate more efficiently at slot-constrained airports, and also introduce new concepts on-board that have redefined the flying experience,” he said. “Moving forward, we will see quite a ramp up in the delivery programme and by late 2017 we will have around 90 A380s in our fleet to support existing and new A380 routes.”

Next week the A380 will fly to Kuwait – making it among the shortest A380 flight globally – but it isn’t averse to criss-crossing continents and its 16-hour Dubai-Los Angeles route is the world’s longest A380 service. Mumbai will also come into the network this month (July 23).

By the end of this year, the number of destinations served by an Emirates A380 will increase to 33, with Frankfurt (September 1), Dallas (October 1), San Francisco (December 1) and Houston (December 3) coming on stream.

To date, the airline’s fleet of A380 aircraft has carried 27.5 million revenue passengers, made over 68,800 trips and covered more than 405 million kilometres. The airline currently has over 10,000 cabin crew and 900 flight deck crew specially trained to operate its growing A380 fleet.