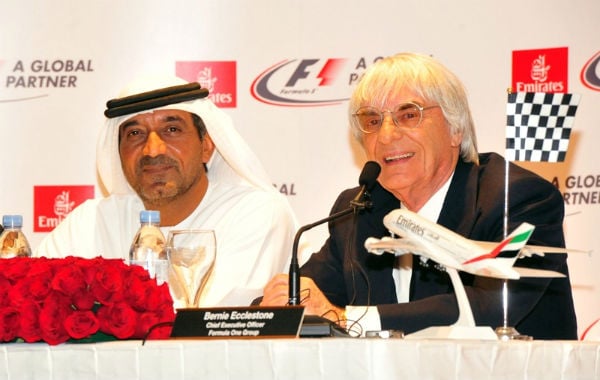 HH Sheikh Ahmed bin Saeed Al-Maktoum, chairman and chief executive, Emirates Airline & Group, who announced the sponsorship deal alongside Formula One commercial supremo Bernie Ecclestone at a press conference in Dubai, said it was worth “above $10 million” but did not disclose the exact value.

Under the sponsorship agreement, Emirates’ branding will be present at 15 races on the 2013 FIA Formula One World Championship, starting with the Malaysia Grand Prix in Kuala Lumpur in March, specifically covering circuit bridges, associate ground signs and Formula One Paddock Club – although it won’t appear at the Bahrain Grand Prix or Abu Dhabi Grand Prix, which are sponsored by Gulf Air and Etihad Airways respectively.

Sheikh Ahmed said sponsoring the F1 was a logical fit, given that it flies to all destinations on the racing calendar, and it marked “another big step” in becoming a global lifestyle brand.

Emirates will release packages for F1 fans, much as it does with other sponsorships, such as football, and passengers will be able to watch races live in-flight.

The deal thrusts the relationship of F1 and GCC states into the spotlight however – and the commercial dynamics between Dubai, Bahrain and Abu Dhabi.

Another permutation would be if Qatar entered the circuit. Eccelstone said it has had talks with Qatar, although nothing recently.

Asked whether the Emirates deal is a precursor to Dubai having its own F1, Sheikh Ahmed said “we cannot exclude the possibility”. Currently neither Dubai nor Qatar have the infrastructure in place to handle F1.

Bernie Ecclestone, chief executive officer of the Formula One group, said he was happy with the way things are at the moment. “But with me you never know…things can change”. He added that the prospect of having an Emirates F1 team at some stage would be a “natural thing to do”.

F1 had been weighing up an IPO but Ecclestone said it was postponed because the market conditions weren’t right.

Sheikh Ahmed, the uncle of the ruler of Dubai, said the airline’s total sports sponsorship now stands at Dhs1 billion ($272.25 million) for this year.