Dubai carrier Emirates has revealed its latest nose-to-tail Expo 2020 Dubai livery on its A380 aircraft.

Emirates is the Premier Partner and Official Airline of Expo 2020 Dubai which will open to the public this Friday.

The new Expo 2020 Dubai livery will appear on three Emirates A380 aircraft. The distinctive blue Expo aircraft will join the 40 other special liveries dedicated to Expo 2020 Dubai, which have collectively flown to over 130 destinations across the Emirates network since 2018.

The latest livery will feature on the aircraft that flies to Los Angeles on September 29.

The new livery is a departure from the airline’s traditional white-and-gold paint scheme. The new bright blue aircraft livery features large-scale graphics in green, orange, pink, purple and red, which run across the fuselage and all the way up to the tail and fin interlaced with the distinct ring-shaped Expo 2020 Dubai logo. 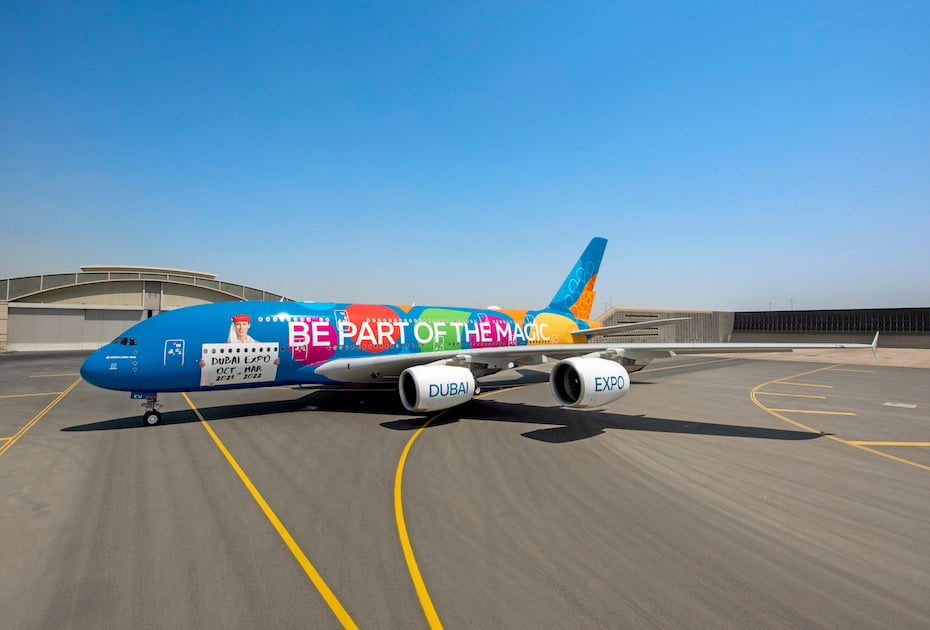 Special ‘Dubai Expo’ and ‘Be Part of the Magic’ messages run across both sides of the A380 fuselage. The engine cowls also carry the Expo 2020 Dubai messages and dates of the event.

Also, there is an image of Nicole Smith-Ludvik on both sides of the aircraft, holding a message board that says: ‘See you there’ and ‘Dubai Expo Oct-Mar 2022’. A video of Smith-Ludvik atop the Burj Khalifa, celebrating the UAE’s addition to UK’s Amber List last month, went viral.

As part of the new livery, the Emirates red belly branding, which can be only seen when the aircraft is flying overhead, has been replaced by the Opportunity Pavilion-themed orange Dubai Expo branding.

The new A380 livery was designed, painted, produced and installed in-house by the teams at Emirates. The livery was not just a decal, but a complete paint project, and is, according to the airline, by far the largest such project it has embarked on.

The airline revealed details of how it completed the paint job. The paint on A6EEU, the aircraft chosen for the livery, was completely stripped. After that, eleven colours were applied on the aircraft. A ‘wild spray method’, electrostatic spray guns and conventional cup guns were used to put on the different colours, using over 2,500 sqm of tracing and masking material.

All of the stencils and tracing guides were produced in-house by the airline’s UV printer and graphics workshop. The Emirates Engineering Aircraft Appearance Centre teams fine-tuned the outlines and masking to convert the designs onto a three dimensional aircraft, in addition to managing the contrasting colours and background shades in this unique livery.

Decals were then applied on the engine cowls and, as well as the image of the EmiratesCabin crew holding the message boards adjacent to the aircraft’s exits.

The process of painting the livery design and applying the decals took 16 days and 4,379 man-hours to complete.

The airline has also opened bookings for visitors to choose their preferred date and time slots in advance to visit its pavilion at Expo 2020 Dubai. Located in the Opportunity District, and in close proximity to the Al Wasl Dome, the four-storey Emirates pavilion is open daily from 10am-10pm. It will feature interactive multi-sensory interactions and will offer a preview of the future of commercial aviation, and the role of science and technology in the next half century of air travel.

Read: Emirates opens bookings for visits to its pavilion at Expo 2020 Dubai