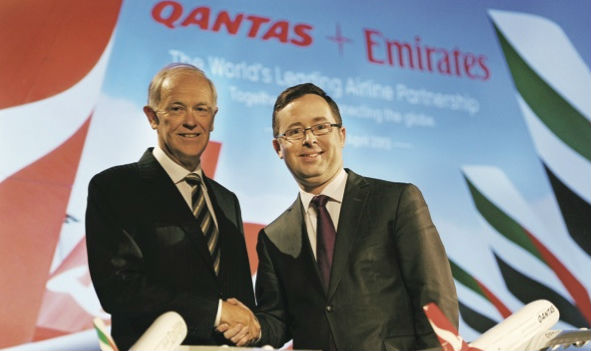 It has been just over a year since Dubai-based Emirates first announced a non-equity, codeshare partnership with struggling Australian carrier Qantas.

The five-year alliance received conditional approval from Australia’s Competition and Consumer Commission in late March 2013, just days before the first Qantas flight was due to transit through Dubai.

Marking the first year anniversary of the announcement on September 6, 2012, the airlines declared that the alliance was already starting to bear fruit.

In the four months between April and July this year, some 850,000 Australians travelled to and via Dubai on Emirates and Qantas services.

“We’ve seen a huge growth in the number of Australians travelling to Europe via Dubai – especially to France, Italy and the UK, as well as a growing trend for UAE destination travel,” said Bryan Banston, Emirates vice president, commercial operations, Australasia.

“Our customers have been quick to make the most of trialling both airlines’ services, including checking out our reciprocal lounge benefits and taking advantage of our seamless frequent flyer offering,” he added.

Together, Qantas and Emirates operate 14 flights daily between Dubai, Australia and onward to other international destinations, along with Australian domestic flights, frequent flyer advantages and shared lounge access.

“We’re really pleased with how well the Qantas and Emirates partnership is going – and based on bookings and feedback, so are our customers,” said Stephen Thompson, Qantas executive manager, international sales.

“We knew we had the potential to do something that would have a huge impact on the industry, and we’re now seeing that with over half a million Qantas customers having travelled through Dubai.

“We’re getting great feedback from customers about Dubai as a hub – from the new terminal, to the lounges, to the fact they don’t have to backtrack from London to reach Europe, saving them more than two hours in travel time to the top 10 destinations in Europe,” he added.

The positive effect of the deal was also reflected in Qantas’ full year financials, with the loss-making airline moving into the black this year. It reported a net profit of AUD$6 million ($5.6 million) after tax for the 2012/2013 financial year.

The Emirates partnership is the “most important element” of a five-year turnaround strategy to make the carrier profitable, said Qantas CEO Alan Joyce.

However, Emirates will be the happier of the two, since Qantas is now filtering all of its European traffic via Dubai instead of Singapore, opined Saj Ahmad from StrategicAero Research.

“As time goes on, there will be more data to see who is faring well, where the strength of financials is and what the future strategy is – especially as Dubai Airport will have major runway work in 2014, flights will be tempered and some airlines may opt to move to Dubai World Central instead,” he stated.

“The next year or so will definitely be a litmus test for Qantas and Emirates in more ways than one – but given Emirates’ speed of expansion, there is little evidence to suggest that this pact will see any sort of weakening.”

But while the alliance may be going strong, there are no signs to indicate that the two airlines will target a traditional equity merger in the future.

“Emirates has shied away even from doing an IPO, so the last thing they want is the baggage of merging with a failing Aussie airline that is losing money hand over fist on international flights,” stated Ahmad.

“Emirates doesn’t care for mergers or buying stakes. It is so big, it has enough to worry about itself and where it is going rather than a merger with Qantas.”