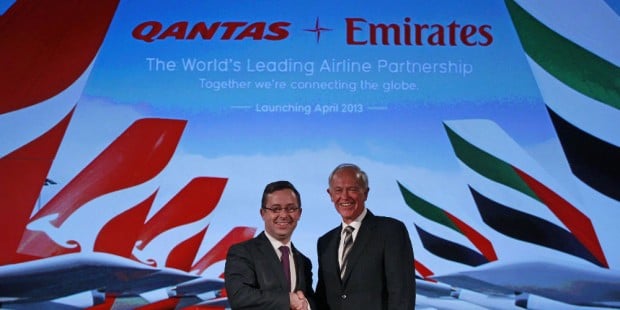 Qantas and Emirates announced that they have welcomed the Australian Competition and Consumer Commission’s (ACCC) conditional approval of their partnership for a period of five years.

The ACCC stressed that the airlines had to maintain at least their pre-alliance capacity on routes between Australia and New Zealand because of concerns about reduced competition.

The decision follows a six month review process by the ACCC that included several rounds of public submissions, a pre-decision conference and an analysis of the benefits the partnership will deliver to customers.

“Both airlines will be disappointed that the ACCC did not grant them a 10-year deal as they had hoped, but even with the approval of a five year pact, there is no reason why the ACCC would not extend this when the time is right,” stated aviation analyst Saj Ahmad.

“For Qantas, this is a great move. Qantas has been battered by the efficiencies and world-class products offered by its rival Arab airlines and is a loss making airline struggling to keep its head above water.

“Until this deal with Emirates came about, Qantas had zero presence in the Middle East – an almost suicidal stance given the swathe of growth in the GCC region. But tying up with Emirates not only allows them to make use of Emirates dedicate terminal hub in Dubai, it also allows them to better connect passenger via to and through Dubai,” he added.

Qantas and Emirates first applied to the ACCC for authorisation of their partnership in September 2012. They received its draft determination in December, which indicated ACCC’s intention to approve the partnership for a period of five years.

The commission then approved an application for interim approval in January, which enabled the two airlines to coordinate pricing, schedules and capacity. Fares on the joint network went on sale in mid-January for travel from March 31 2013, subject to regulatory approval.

“Qantas is an Australian icon and the future of its international business is much brighter with this partnership,” Qantas CEO Alan Joyce said in a statement.

“Customers are already responding very strongly to the joint network that Qantas and Emirates have built, and to the frequent flyer benefits that extend across it, with a significant increase in bookings.”

The two airlines will offer a combined total of 98 flights a week between Australia and Dubai, with Qantas continuing to operate daily services from Melbourne and Sydney through to London.

“What this deal does show is that Emirates is an airline that has frankly embarrassed Qantas into submission for this tie-up,” said Ahmad.

“For all the years that Qantas has lambasted Emirates with unfounded allegations about getting free or discounted fuel, none of which has ever been proven by Qantas, it just shows that Emirates is a big power broker that cannot be ignored.

“Qantas found that out the hard way and there is no escaping the fact that they are the weak party in this partnership,” he added.