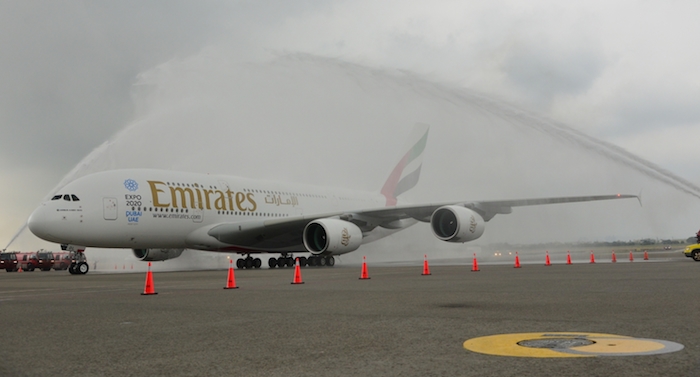 Dubai-based Emirates announced that it operated a one-off service of its Airbus A380 aircraft to Taiwan Taoyuan International Airport on Sunday.

The deployment of the A380 follows the recent completion of enhancements at the airport to make it compatible with the double-decker aircraft, a statement said.

Emirates’ vice president, Hong Kong, Taiwan and Guangzhou Edwin Lau said: “Emirates is honoured to be the first airline to land the A380 at Taiwan Taoyuan International Airport.

“Taiwan is an important market for Emirates, and we’ve witnessed increased demand from passengers since we began daily flights between Dubai and Taipei in February 2014.”

Emirates currently flies to 146 destinations across 80 countries and via one stop in Dubai, passengers who travel from Taipei can connect to other destinations in the Middle East, Africa, Europe and the Americas, the airline said.

The Dubai carrier is currently the world’s largest operator of the double-decker aircraft. With a fleet of 64 A380s, it serves 34 global destinations and 11 in the Far East, which include Auckland, Bangkok, Beijing, Brisbane, Hong Kong, Melbourne, Perth, Seoul, Singapore, Shanghai and Sydney.

It also frequently launches one-off A380 services to select destinations. Most recently, Emirates deployed the jumbo aircraft on one-off services to Doha and Bahrain last weekend to support additional capacity during Eid.