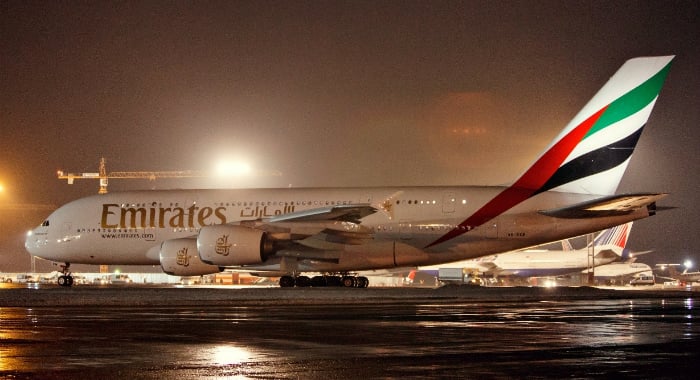 Dubai-based Emirates will begin double daily Airbus A380 services to Russian capital Moscow from August 1, 2014, to increase capacity and meet rising demand on the route.

The second A380, which will operate as flight EK133/134, replaces the existing Boeing 777 operation and increases seat capacity on the route by 15 per cent, the airline revealed in a statement.

“Since launching services between Dubai and Moscow on July 1 2003, we have received a very positive response from Russian customers and trade partners to the Emirates product,” said Thierry Antinori, Emirates‘ EVP and chief commercial officer.

“Our Moscow service continues to grow in popularity, especially since the introduction of the first A380 on this route in December 2012. This second aircraft upgrade will help us meet the ever increasing demand,” he said.

The new A380 service leaves Dubai as EK133 at 0935hrs, arriving at Domodedovo Airport at 1445hrs. It returns as EK134 leaving Moscow at 1755hrs landing at Dubai International Airport at 2255hrs.

Igor Borisov, director, Moscow Domodedovo Airport, said: “This new milestone promotes Domodedovo airport to the ‘premiere league’ of the world’s airports, one of just a few offering Emirates’ service entirely using A380 aircraft. The airport is prepared – our ground infrastructure, equipment and staff are ready and set to provide the highest product and service.”

Across its two decks, Emirates’ A380 will offer 399 seats in economy class, 76 lie-flat seats in business class and 14 first class private suites. The aircraft offers an onboard lounge on the upper deck for premium class passengers, while first class passengers also have two onboard shower spas. Passengers across all cabins have access to high speed Wi-Fi on the flight and 1,600 channels of ice, Emirates’ in-flight entertainment system.

Emirates, whose fleet currently includes 44 of the jumbo jets with 96 on order, is the world’s largest operator of A380s.

It flies the jumbo jet to 25 destinations, and will start operating scheduled A380 services to Barcelona from February 2014.