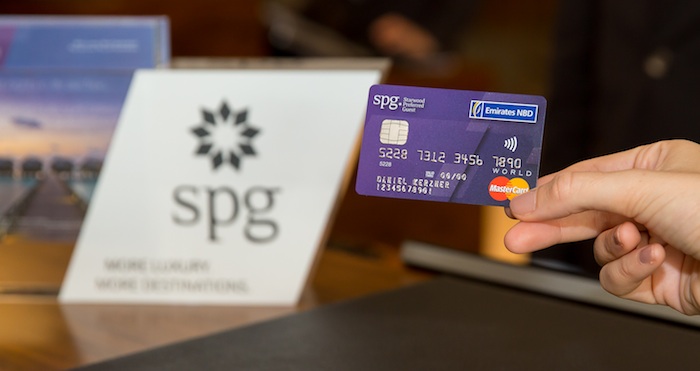 Residents in the United Arab Emirates have yet another credit card to choose from following the launch of the Emirates NBD Starwood Preferred Guest World MasterCard at the Sheraton Grand Hotel on Tuesday.

Cardholders are being enticed with instant SPG Gold status – which normally requires around 25 nights per year – as well as 25,000 Starpoints on activation and another 25,000 if members spend $20,000 in the first three months. Consumers need to earn Dhs 30,000 a year and pay an Dhs 2,500 joining fee and Dhs 1,500 renewal fee.

One Starpoint is earned per dollar spend on domestic and international spends and two Starpoints per dollar spent at all SPG participating hotels, and an additional benefit includes 30 per cent off on F&B and spas among other leisure benefits.

Vice president – Digital, Loyalty and Partnership Marketing for Starwood Hotels & Resorts EAME Daniel Kerzner said the tie-up will enable guests to have an “elevated experience” when taking UAE short breaks or travelling overseas. “Dubai is our number one market after New York – and that may change in the next few years,” he said. “It really made sense from an issuance and acceptance standpoint to be working with MasterCard and Emirates NBD.”

Citing existing partnerships with Uber and Emirates, he added that the card “binds spends together” and broadens the opportunities for guests earning points before they even arrive at a Starwood hotel.

Senior VP and general manager of UAE Business for MasterCard Eyad Al-Kourdi said the card enables it to target a new set of consumers who love to travel. “We still have a lot of room to grow,” he said.

It marks Starwood’s first co-branded card in the Middle East, and only fifth globally, complementing the United Kingdom, United States, Japan and Canada (all with American Express).