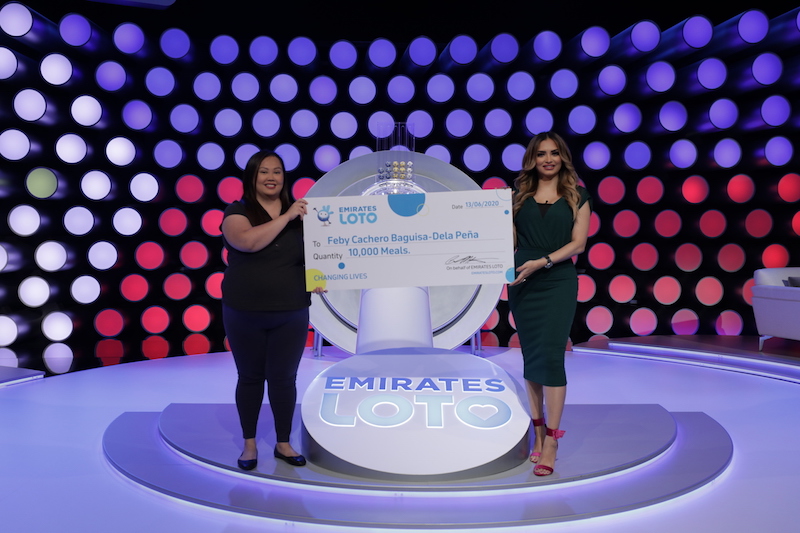 Emirates Loto announced during its live draw on June 13 that it will support Filipina expat Feby Cacher Baguisa-Dela Peña in her initiative called Ayuda aimed at helping community members in need.

Emirates Loto said that it was helping to provide the resources for 10,000 meals. The announcement was made against the backdrop of the Philippines Independence Day which was celebrated the day before on June 12.

Feby, an unemployed mother of three, has been spending over Dhs500 of her own funds each day since Eid Al Fitr to feed more than 400 people per day who have been made redundant due to the current economic challenges.

Each day, she purchases over 50 kg of rice, 60 kg of chicken, and nearly twenty-five dozen eggs to cook two meals a day.

People in need can either pick up the food directly from her apartment – practicing social distancing at all times – or Feby will take it upon herself to deliver the meals to those dependent on her kind gesture.

“Feby is in all senses a role model, and her generous act of kindness is now a source of inspiration for many across the globe,” said Paul Sebestyen, Emirates Loto’s CEO. “Her story resonated with all of us here at Emirates Loto and we knew that we had to support her initiative to ensure that it sustains and that those in need continue to be nourished every day. The world can use more Febys as she truly represents the best of us.”

During the same live draw on June 13, two winners matched five of the six chosen numbers and hence split Dhs1m equally among them.

A total of 110 participants matched four of the six winning numbers and hence won Dhs300 each.

No one has yet claimed the jackpot which will remain at Dhs50m for the next weekly draw scheduled to take place at 9pm on Saturday, June 20.