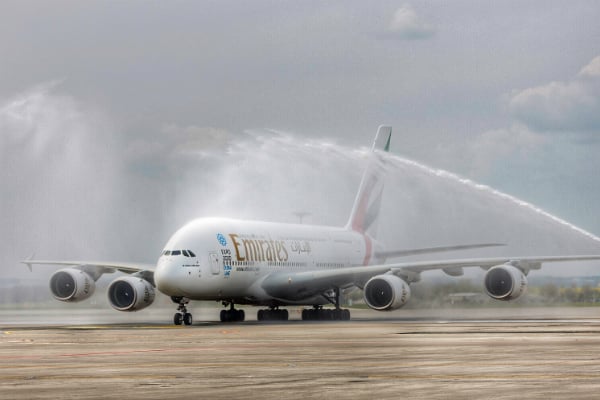 Dubai’s Emirates has said it is the first carrier to operate an A380 aircraft to Prague, Czech Republic and Taipei, Taiwan following the landing of the two services today.

The Emirates A380s landed in Taipei and Prague at 16:50 and 13:25 local time respectively and will address growing demand on both routes.

The airline launched its Prague route in July 2010 with a daily A330 service and has carried 1.1 million passengers between the city and Dubai.

“Taiwan is a significant market for Emirates and we have witnessed a strong and steady growth in demand since our start of services in 2014,” said Emirates executive vice president and chief commercial officer Thierry Antinori.

“We are pleased to add Prague too to our list of more than 40 A380 destination cities and introduce our innovative, best-in-class onboard product and renowned service to Czech customers.”

Anthony said that the higher capacity aircraft would support tourism and trade.

The carrier currently operates A380s to 40 destinations with a fleet of 77 super jumbos.

Emirates Duba-Prague-Dubai route EK139 and EK140 will be served by a three-class configuration with a capacity for 519 passengers. This will include 429 economy seats, 76 business class seats and 14 first class suites.

In contrast, the Taipei flights EK366 and EK367 will be served by the carrier’s new two-class configuration with 615 seats – 557 in economy and 58 in business.