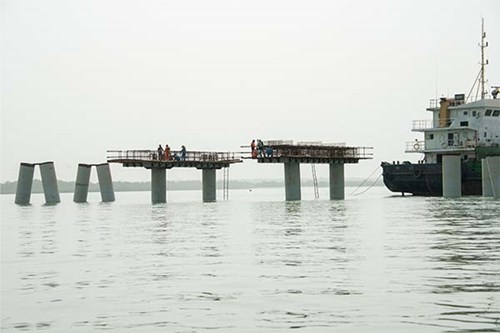 Emirates Global Aluminium (EGA) has announced that construction of its new bauxite mine project in Guinea, West Africa, has reached 50 per cent completion.

The Guinea Alumina Corporation (GAC) project, which has a total budgeted cost of approximately $1.4bn, is expected to produce some 12 million tonnes of bauxite per year when complete.

The first bauxite exports are expected during the second half of 2019.

More than 4,000 Guineans are currently working on the project, and it is anticipated to employ 1,000 people directly and as contractors when fully operational.

The project is one of the largest greenfield investments in Guinea in the past 40 years and will be a new global source of bauxite supply when ready.

GAC’s mining concession covers an area of 690 sqkm and contains one of the largest bauxite deposits in Guinea. The concession is located in the Boké region of north-western Guinea, close to existing mines that are operated by other companies.

GAC’s mining concession area mostly consists of low hills. Bauxite deposits are found at or near the surface on the plateaus of these hills and will be mined via standard open pit drill-and-blast operation, a statement said.

Extracted bauxite will be transported by rail to Kamsar port, some 70 kilometres away, using existing railway lines that are already used by other mining companies.

GAC is also building rail loops and spurs to connect its mine and loading facilities to the existing railway line.

At the port, bauxite will be transported by a 5.3 kilometre-long conveyor system on a jetty and loaded onto barges. Kamsar is located on the river Nunez some 17 kilometres from the open sea and is inaccessible to the world’s largest vessels. The ore will be transshipped to ocean-going vessels at a floating transfer point, the statement added.

Guinea has more than seven billion tonnes of bauxite resources, over a quarter of the world’s total.

EGA, which is also building the UAE’s first alumina refinery at Al Taweelah in Abu Dhabi, has signed an agreement with Compagnie des Bauxites de Guinée for the supply of bauxite for the refinery.

The first alumina from the Al Taweelah refinery is expected to be delivered during the first half of 2019.

Alumina, which is refined from bauxite, is the feedstock for aluminium smelters. Al Taweelah alumina refinery is expected to meet 40 per cent of EGA’s alumina needs once it is fully operational.