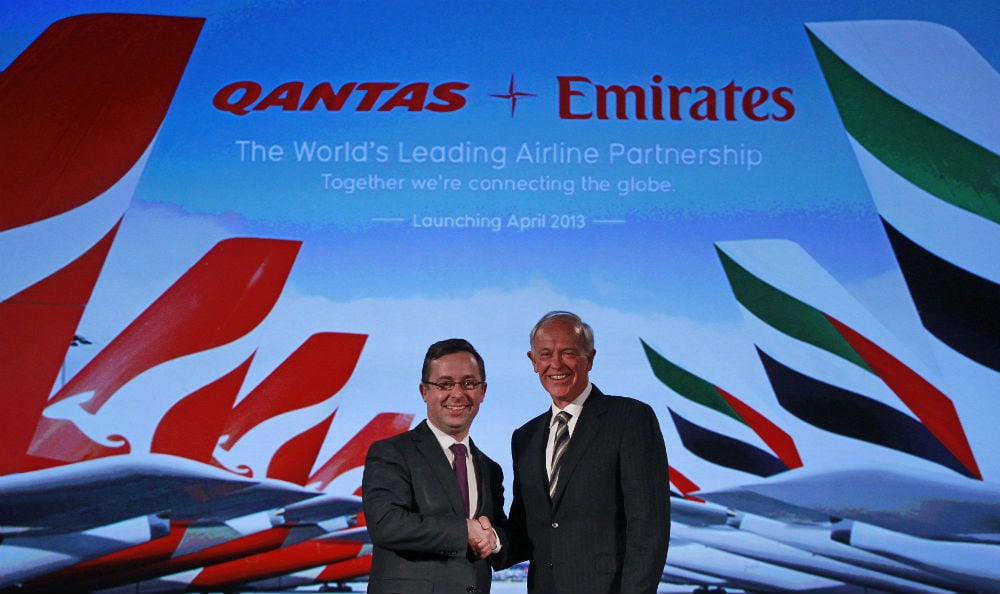 Australia’s struggling Qantas Airways has agreed to a 10-year alliance with Dubai’s Emirates, a key step in the carrier’s efforts to shore up its loss-making international business.

Qantas will replace Singapore with Dubai as its hub for European flights from March 2013 and coordinate pricing, sales and schedules with Emirates under the partnership unveiled on Thursday.

The Australian airline will end its existing relationship with British Airways at the same time as a result of the new alliance.

“A key objective is to make Qantas International strong and viable, and bring it back to profitability,” Qantas Chief Executive Officer Alan Joyce told reporters. “This partnership will help us do that.”

Joyce said the airline remained committed to reaching break-even in its international business in the 2015 financial year.

He declined to comment on analysts’ estimates that the alliance would save Qantas A$90-100 million before taxes annually, or provide the airline’s own forecasts for cost savings.

The long-anticipated deal was received warmly by investors, with Qantas’ share price surging more than six per cent in early trade.

The arrangement will enable Qantas to cut loss-making international routes and focus on its profitable domestic and budget operations, while helping Emirates compete against from its main state-backed Abu Dhabi rivals Etihad Airways and Qatar Airways.

The alliance is deeper than a straightforward code-share arrangement — where airlines share some flights — but stops short of a global revenue-sharing deal or equity injection from either side.

For customers, benefits include the pair sharing airport lounges and frequent flyer programs.

It helps Qantas, nicknamed the Flying Kangaroo, confront its disadvantage in the region as a so-called “end-of-line” carrier. Qantas has to spend more on fuel than other airlines in Asia to carry passengers on inter-continental routes as its aircraft are based in Australia.

The hub carriers can service Europe to Australia routes better by picking up passengers from multiple European, Asian and Middle Eastern departure points.

Qantas will drop its Frankfurt route as part of the deal.

The Australian airline has been stripping costs out of its business after a year troubled by a record fuel bill, rising competition and a labour union that has opposed the carrier’s spending cuts.

It last month cancelled orders for 35 Boeing Dreamliner jets to further cut costs after posting a full-year net loss of A$244 million ($254.8 million), its first loss in 17 years, due to its bleeding international division.

Emirates, meanwhile, is looking to increase its business in Australia to counter moves by Etihad and Qatar.

Etihad doubled its stake in Qantas rival Virgin Australia to 10 per cent last month and Qatar Airways launched its first service to Perth this month, saying that it also wanted to partner with Australian carriers.