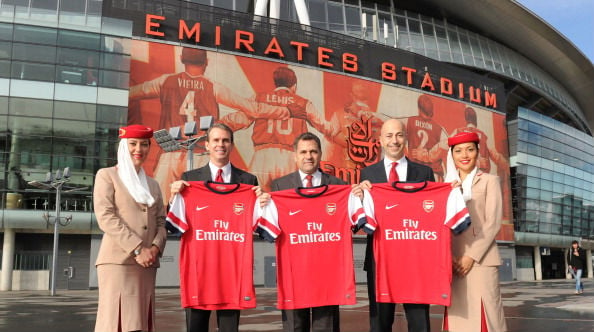 Dubai-based Emirates Airline has signed a £150 million ($240 million) deal with Arsenal Football Club that grants the airline a five-year extension to its shirt partnership with the club, it was announced in a joint statement.

As part of the partnership, Arsenal’s home will continue to be known as Emirates Stadium up to 2028.

The Emirates logo will continue to remain on the front of Arsenal’s playing and training kits and the new agreement also contains a number of marketing rights, which come into effect immediately, to ensure Emirates can engage with Arsenal fans in the UK and abroad, the statement said.

“This is an exciting day for Arsenal Football Club and all our supporters,” said Arsenal CEO Ivan Gazidis.

“The original deal with Emirates was a key facilitator of our move from Highbury and this next phase of our relationship will be just as critical to keep us at the top of the game in England and Europe.

“The fact this partnership will continue for many years to come underlines how much both organisations value and benefit from the relationship,” he said.

Sheikh Ahmed bin Saeed Al Maktoum, chairman and CEO, Emirates Airline and Group commented: “Arsenal’s strong appeal around the globe and ambitious approach to the game parallel our own approach to business, making them a valuable partner for our brand.

“We continue to see immeasurable value in our global sports sponsorships and our sponsorship with Arsenal is no different. The club has been an important enabler of the growth of our business over the last decade and we are confident this will continue as part of our extended deal,” he said.

As part of the agreement, the Arsenal soccer school in Dubai, which launched in 2010 and has trained around 4,000 students, will also continue. Emirates first signed its sponsorship agreement with Arsenal in 2004, providing the airline with naming rights to the stadium until 2021 and a shirt sponsorship that began in the 2006/2007 season.