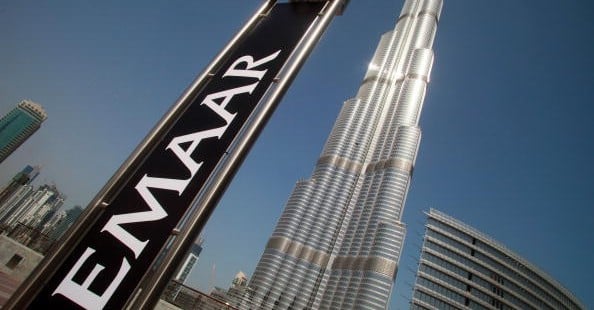 Since that peak, Dubai property prices have slumped, ravaging the sector and leading to a slew of cancelled or postponed projects.

Emaar has sought to offset this slump by diversifying into retail and hospitality and its shares are up 34 per cent in 2013.

“We continue to be surprised by the strength in the Dubai property market, on the residential, hotel, and retail side,” HSBC wrote. “Supply additions are still a concern but not as much as in the past.”

Traders say these reports have buoyed sentiment for Emaar, with property prices also bottoming out and even increasing in some districts after declines of about 60 per cent from their 2008 peaks.

Investors also seem to have shrugged off Emaar’s 28 per cent drop in fourth-quarter profit.

“The market saw a lot of institutional interest in Emaar today, which is mainly due to its potential upside in revenue in 2013 and expectations for high dividend yields,” said Marwan Shurrab, vice-president at Gulfmena Investments.

“We’ve been seeing a lot of (analyst) upgrades from major houses and that’s helping raise interest from institutional investors abroad, bringing in new cash to our market.”

The benchmark now has a relative strength index reading of 75.2 – a value above 70 typically indicates it is overbought – and it followed a similar pattern last year when an early-year surge petered out from early March.

“It’s very different from last year, which was extremely speculative with movement in penny stocks and high-beta names – this time it’s mainly driven by bluechip stocks,” he said.

“This will be the main theme in the coming days,” said Henin. “We’re starting to see sector rotation towards banks – results were pretty good and their dividend yields are extremely attractive in the current world of low interest rates.”

“Speculation is the driving force behind the appreciation in stock prices,” said Naser al-Nafisi, general manager for Al Joman Center for Economic Consultancy in Kuwait.

The market slumped to an eight-year low in November as Kuwaitis took to the streets to demonstrate against changes to electoral rules that opponents said would benefit the government and sideline critics. Since then, the political temperature has cooled and shares have rallied, helped by equity buying by state-linked institutions.