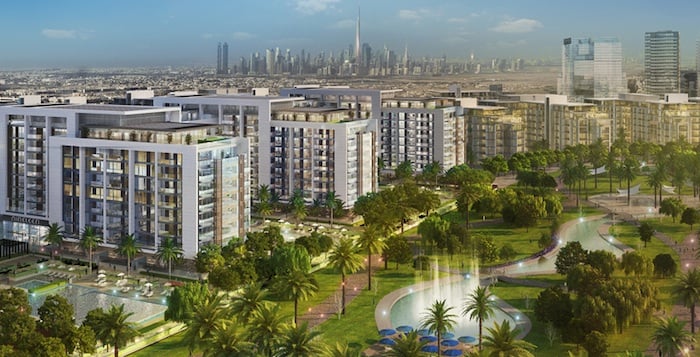 Acacia at Park Heights features 479 residences including one, two and three-bedrooms and offers access to amenities such as a championship golf course and tennis academy.

Featuring views of a green central park, residents will also have access to an outdoor pool for adults and kids, and jogging and bicycle tracks. The residential tower is also close to a shopping mall, hotels, schools, multipurpose community hall, fitness centre with steam and sauna rooms, children’s play areas, and communal spaces, a statement said.

Located at the crossroads of Al Qudra and Sheikh Mohammed Bin Zayed, the development will offer residents access to the Etihad Rail and the upcoming Dubai Metro Purple and Pink lines.

Emaar’s project management team will assure “timely delivery” of the project, the statement added, although no scheduled completion dates were revealed.

Ahmad Al Matrooshi, managing director of Emaar Properties, said: “Acacia at Park Heights, the new residential project within Dubai Hills Estate, will be a value investment for regional and international investors, with the residents set to become part of a thriving neighbourhood.

“The access to outdoor activities will be a great incentive for the home-owners, who will also benefit from the central location of the project.”

The sales launch will be held in four cities – Dubai, Abu Dhabi, Karachi and London – simultaneously on February 28, 2015, on a first-come, first-served basis, the company confirmed.

Launched a year ago, Mulberry at Park Heights features 330 apartments.

“Dubai Hills Estate, an elegantly designed smart city hub within MBR City, is one of the popular destinations today for residential end-users and investors. The development is fast coming to life,” said Matrooshi.

Up to 12,000 apartments and over 2,000 villas will be added to the city’s existing inventory in 2015, property consultant Asteco said in a report this week.

Increasing supply and a better regulated market also mean that prices will stabilise, say experts. A report by JLL predicted that average residential prices will either remain flat or decline in 2015.