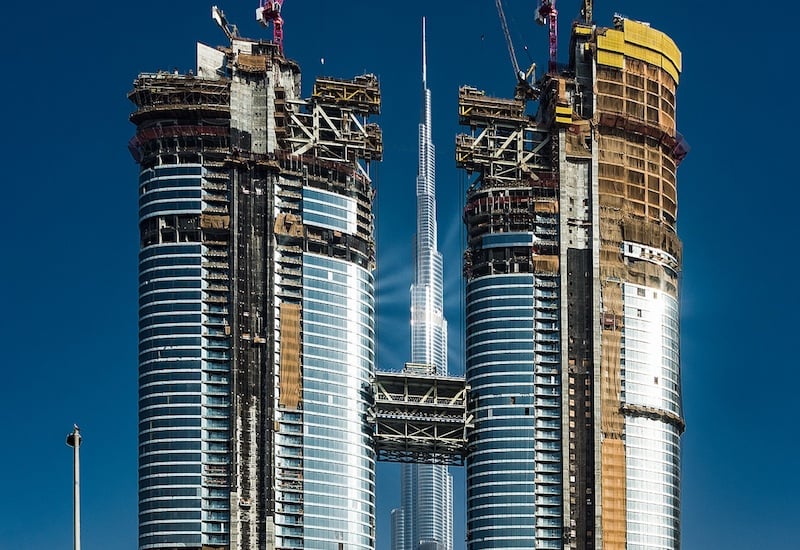 Dubai developer Emaar Properties has constructed and set up a ‘Sky Bridge’ that links two of its Address hotels in Downtown Dubai.

Situated at a height of over 220 metres, the 85-metre-long Sky Bridge – billed as a new tourist attraction – links the new Address Sky View hotel with the Address Residences Sky View.

With a a height of 22 metres and a width of 30 metres, the Sky Bridge has three storeys and will feature eight units of luxury duplexes, a 70-metre-long infinity pool that overlooks Burj Khalifa and The Dubai Fountain, and other amenities.

The structure was fabricated using 4,500 tonnes of structural steel, and was lifted in position using strand jacking technology, customised for the project, a statement said.

A team of experts from five different entities worked on the project that was completed in around 365 days by over 300 workers.

The Sky Bridge faced several design challenges because of the extensive loads of steel and concrete, and the loads related to the infinity pool, pool deck and facade, Emaar said.

A steel frame with three levels was designed to hold the huge loads transferred to the core walls of the two towers it links.

The ambient temperature difference was also considered during the design stage to ensure that it suits the region’s climate, the statement added.

In terms of construction, the main body of the bridge was divided into five elements, each weighing over 400 tonnes each. High capacity cranes, not commonly used in the region, were deployed to lift the huge weights. Special high-capacity hydraulic jacks were also imported from Switzerland.

Another challenge was designing eight custom-made Boom and Derrick systems that had to be assembled at level 50 – about 200 meters high – on both towers. Laser technology was deployed for precise leveling, Emaar said.

Each element was assembled on ground and they were then lifted over a period of four months from November 2016 to February 2017.

The MEGA truss – the heaviest component – was lifted to the height of 220 metres using the high-capacity hydraulic jacks and cables.

The Sky Bridge has also undergone “extensive fire proofing and other safety and security tests”, the statement said.

“Given the proximity to Burj Khalifa Metro Station and the Metro Link, elaborate safety measures were put in place, and a clearly structured logistics plan was followed,” it added.

Mohamed Alabbar, chairman of Emaar Properties, said: “Building and lifting the Sky Bridge is the result of the hard work and collaboration of some of the best international experts in the field, who addressed various challenges through their innovative and creative approach.

“They have accomplished a remarkable engineering feat that will serve as a referral point in modern construction.”

Designed by Skidmore, Owings and Merrill – the architects of Burj Khalifa – Address Sky View has 169 luxury hotel rooms on 12 levels with amenities including restaurants, lounges, an event venue, meeting rooms, three pools including a rooftop pool and a spa.

The project is also linked directly to The Dubai Mall Metro station through a travellator.