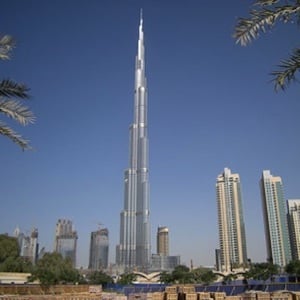 Dubai’s Emaar Properties, developer of the world’s tallest building, said revenue from villa sales and its rental and hospitality units rose last year but this was not enough to offset an 85-per cent drop in apartment sale earnings.

The Gulf’s largest listed developer said apartment sales tumbled to Dhs1.1 billion ($299.5 million) last year from Dhs7.6 billion in 2010. Its 2010 earnings had been buoyed by the handover of much of the units in Burj Khalifa, the world’s tallest tower.

Emaar posted a 27-per cent drop in 2011 profits last month but quarterly profits doubled. It published its full results on Sunday.

On Sunday, Emaar said villa sales jumped 85 per cent to Dhs959 million in 2011 while sales of commercial units and land plots more than doubled to Dhs2.7 billion. Leasing revenue rose 12 per cent to Dhs2.14 billion.

Hospitality revenue from its malls and hotel business was up 25 per cent at Dhs1.22 billion over the same period.

House prices in Dubai have tumbled about 60 per cent from a 2008 peak and no turnaround is expected this year, with supply continuing to outstrip demand.

The property bust has hit developers. Dubai government-owned Nakheel was forced into a $16 billion restructuring, while shares in Emaar – 31 per cent owned by the Dubai government – have plunged 81 per cent in just under four years.

“The group’s management believes the loan from Amlak is fully recoverable,” Emaar said.

Emaar values its 48-per cent stake in Amlak at Dhs724 million. The mortgage firm’s shares have been suspended since November 2008.

On Tuesday, the federal government said it had cut Almak’s debt by $1.1 billion.

Emaar’s provisions for “doubtful debts” owed to it were Dhs127 million in 2011, up from 85 million a year earlier.