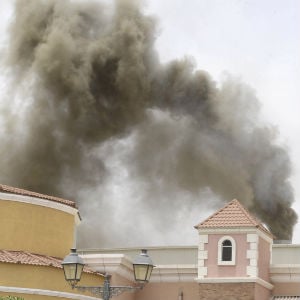 An electrical fault caused a deadly fire at a shopping mall in Qatar last month that killed 19 people, most of them children, state news agency QNA cited investigators on Wednesday as saying.

The blaze, which began in a sporting goods store in Doha’s Villagio Mall, was “due to faulty electrical wiring in a fluorescent light,” the statement said, adding the plastic components of the light fixture caught fire and quickly spread to the Gympanzee nursery next door.

“The fire was not premeditated,” the statement said.

Civil defence workers arrived at the scene three minutes after being alerted to the fire, but only discovered half an hour later that there were children trapped inside the nursery.

The nursery, which was not licensed, did not meet required safety conditions, it said.

Among those killed were 13 children, two firefighters and four teachers. The victims were from France, Spain, South Africa, New Zealand, the Philippines, Japan and Benin, among other countries.

The investigating committee found a “lack of adherence to laws, systems, and measures by all concerned parties to different degrees. This includes adherence to design, license and safety conditions, which contributed to the Villagio catastrophe,” it said.

It added there was a “lack of response” among the mall’s security staff as well the staff in the store where the fire started.

The committee found the mall had insufficient plans to “prevent, contain or at least reduce the effects of such an incident,” QNA said.

It issued 11 recommendations to reduce the risk of future incidents, including a review of regulations governing the activities of childcare facilities, which allows nurseries to register under other names, such as activity centres.

Qatari authorities said after the fire that a committee would be formed to monitor building safety standards.

The Villagio Mall, which opened in 2006, is an Italianate-themed shopping complex with a hotel, theme park and canal plied by gondolas.