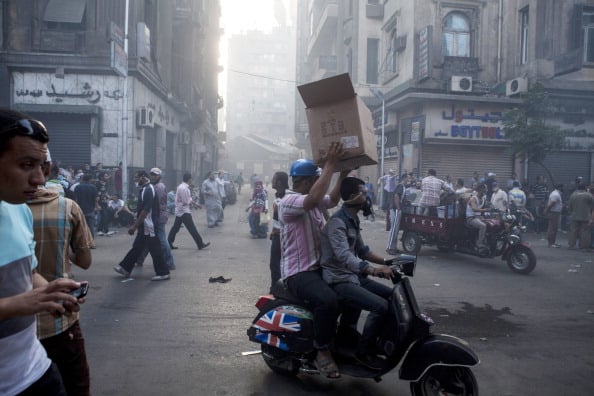 In his full-throated cry of support for the Egyptian authorities, Saudi King Abdullah on Friday described street protests by the Muslim Brotherhood as representing “terrorism and sedition”.

That stark view of a crisis that has killed hundreds in the past week shows why the world’s top oil exporter will continue to back Egypt’s crackdown on the Brotherhood even while its Western allies try to convince the generals to back down.

When the “Arab Spring” revolts blew across the Middle East in 2011 – toppling one authoritarian president after another – the kings and emirs of the rich Gulf monarchies held on to power but were shaken as never before.

One of King Abdullah’s nephews, Mecca Governor Prince Khaled al-Faisal, decried the uprisings in a poem as a “dust storm sweeping Arab lands” in which traditional rulers had been defamed as “backward, reactionary and barbaric”.

Two years later, those same rulers now see a chance to restore the stable order that had held for generations in the region, and are determined to spend their oil billions to bring back trusted friends.

Nowhere is that more true than Egypt, long Saudi Arabia’s most powerful regional ally and whose army chief Abdul Fattah al-Sisi has close connections to the ruling family after serving as defence attache in Riyadh.

The gulf rulers’ are alarmed by popular Islamist movements, such as the Muslim Brotherhood, which benefited most from the downfall of entrenched dictators after 2011 and which the princes see as threatening the principle of hereditary monarchy.

“Saudi strategists might see groups influenced by the Brotherhood as the only ones that could emerge to challenge their rule,” said a Saudi journalist speaking on condition he not be identified.

The Saudi stance is shared with the United Arab Emirates, which this year put on trial Islamists it suspects of plotting to overthrow the state, and on Friday praised Egypt’s army for responding to protests with “maximum self restraint”.

Only days after Egypt’s army ousted the Brotherhood’s Mohamed Mursi from the presidency on July 3, Riyadh and Abu Dhabi pledged aid of $8 billion. A third Gulf monarchy, Kuwait, added another $4 billion, which should cover Egypt’s deficit for months.

Saudi princes regard the Brotherhood as an ideological competitor with an aggressively activist political doctrine that disdains Riyadh’s ties with the West and aims to introduce democracy. Riyadh accuses the Brotherhood of betraying its trust after it gave members shelter from persecution in Egypt in the 1960s, only to see them agitate for change in Saudi Arabia.

“There’s a lot of concern throughout the Gulf that the Brotherhood is attempting to infiltrate and to destabilise governments,” said Robert Jordan, former U.S. ambassador to Riyadh and now based in Dubai.

On Saturday, billionaire Prince Alwaleed bin Talal, another nephew of the Saudi king, sacked a Kuwaiti preacher from his top job at a religious television station he owns because of the cleric’s brotherhood ties.

The tough Saudi line is shared with the Emirates, which has no quarter for the Brotherhood.

“I don’t think the UAE will step back from giving help to Egypt according to how many are dying. They are convinced that the government is doing the right thing and defending the country from a terrorist group,” said Ibtisam al-Qitbi, a political analyst in Dubai.

Kuwait, the other Gulf kingdom to promise billions, is also wary of the Brotherhood and expelled nine Egyptian members of the group on Sunday for protesting, but its position is somewhat more nuanced than that of either Riyadh or Abu Dhabi.

Brotherhood politicians serve as opposition members of Kuwait’s parliament and have long been part of the establishment. A Foreign Ministry statement on Friday regretted the “large number of Egyptian fatalities”.

“There is a dilemma in Kuwait. The Muslim Brothers are well entrenched in the political scene and also in the government apparatus,” said Ghanem al-Najjar, professor of political science at Kuwait University.

The one rich Gulf country that did not share the Saudi-led consensus was Qatar, which backed Egypt with $7 billion during Mursi’s year in power.

Qatar condemned both Mursi’s removal and last week’s violence, calling on the generals to “refrain from the security option” in tackling protests.

Nevertheless, Qatar has a new ruler after its emir stepped down this year in favour of his son, and many in the Gulf believe it is stepping back from an ambitious foreign policy that saw it lavish funds on Arab Spring revolutionaries.

In addition to cash, which Cairo urgently needs to buy food and fuel, Gulf friends provide it with diplomatic cover. Saudi Foreign Minister Prince Saud al-Faisal, another nephew of the king, used a visit to France on Sunday to warn Western countries not to pile pressure on Cairo, saying “we will not achieve anything through threats”.

The West also viewed the Brotherhood’s rise with alarm. But Western countries were clearly hoping that democracy would force the Islamists either to adapt to popular demands for better government or be voted out of office. The absolute monarchies of the Gulf never shared that faith in popular rule.

“The Saudis are not wildly enthusiastic about the argument that the best way of getting the Egypt we all want is by having the Muslim Brotherhood lose an election,” said a diplomat in the Gulf, arguing that Riyadh supported the crackdown.

Nevertheless, the violence of the past week could bring precisely the sort of instability Riyadh was seeking to avert: “The king,” the diplomat added, “doesn’t like blood being spilled.”

The Gulf princes may have written a blank cheque for Sisi, but in return for their cash, they will be expecting the Egyptian military commander to deliver the promised stability.

“Restoring order and making sure to avoid any complications, getting security back, is the most important thing now. Then any political discussion can take place,” said Abdulaziz al-Sager, head of the private Gulf Research Centre thinktank in Jeddah.