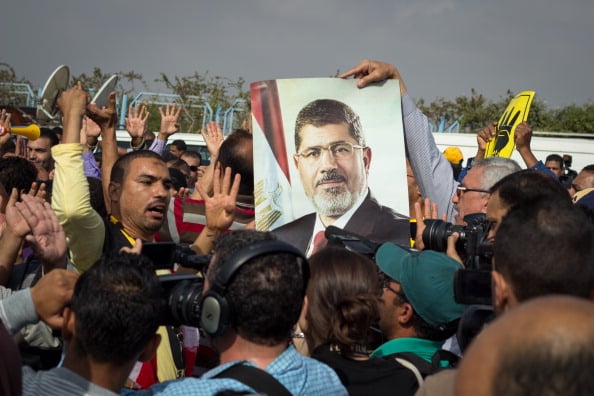 Egypt’s deposed President Mohamed Mursi on Saturday rejected the right of a court to try him and other Muslim Brotherhood leaders on charges related to a mass jail break in 2011, security and judicial sources said.

Mursi and his comrades, including the Brotherhood’s top leader Mohamed Badie, are charged with killing and kidnapping policemen, attacking police facilities and breaking out of jail during the 2011 uprising against Hosni Mubarak.

“As far as I’m concerned, these procedures are void and I don’t accept them,” Mursi said, describing himself as the president of the republic and calling on the Egyptian people to continue their “peaceful revolution,” according to the sources.

Some of the other roughly 130 defendants, who were held in a different courtroom cage from Mursi, applauded him and chanted: “Down with military rule!” It is not unusual for high-profile defendants to be locked up in cages in Egyptian courts.

The authorities have fiercely suppressed the Brotherhood since army chief, Field Marshal Abdel Fattah al-Sisi, toppled Mursi in July following mass protests against him. Thousands of Mursi supporters have been jailed and hundreds killed.

The case was adjourned to Feb. 24 after the lawyers defending Muslim cleric Safwat Hegazy asked for the judges to be replaced, a matter pending approval from another court.

One lawyer, Mohamed Abou Layla, said the request had been made because the court was not cooperating with the defence team. Another said the judges had refused a request to remove the glass cage to allow defendants to follow proceedings better.

Egypt’s authorities have levelled five sets of charges at Mursi, including insulting the judiciary, inciting the killing of protesters and international conspiracy. Mursi could face the death penalty. The Muslim Brotherhood, which renounced violence decades ago, has said it views Mursi as a political prisoner.

In a separate case, a court in Alexandria acquitted six policemen accused of killing dozens of protesters in 2011.

Militant attacks in Egypt have intensified in recent months with bombings and shootings spreading beyond the Sinai peninsula. On Saturday, a national security officer was shot dead by gunmen in Sharqiya province north of Cairo in what Prime Minister Hazem el-Beblawi called an assassination.