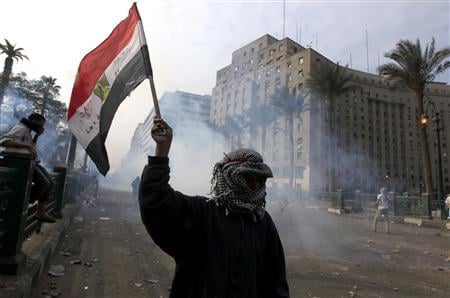 Egyptian President Mohamed Morsi issued a decree on Thursday that defends his decisions from judicial review, causing fury among his opponents and prompting violent clashes in central Cairo and other cities.

Egypt’s stock market plunged 9.6 per cent on Sunday in its first day after the news, halted only by automatic curbs – the worst drop since the uprising that toppled Mubarak in February, 2011.

“The bottom line is that Morsi – and by proxy the Muslim Brotherhood – has too much power. He already holds executive and legislative authority and now he’s moved to place himself and his decisions outside the reach of the judiciary as well. That’s too much power in the hands of someone you actually trust – and the non Islamist revolutionaries absolutely do not trust Morsi,” Ashraf Khali, author of Liberation Square: Inside the Egyptian Revolution and The Rebirth of a Nation told Gulf Business.

Investors are concerned Egypt’s political unrest could have widespread implications for the Middle East, amid accusations Morsi is behaving like a new dictator.

“Morsi’s power play may very well kick off the start of a second revolution against his rule. That’s the way the people in Tahrir Square are talking right now. The irony is that Morsi is claiming he needs all this power in order to protect the ideals of the revolution – meanwhile across town the protestors are talking about protecting the revolution from him,” said Khalil.

“It’s too early to tell where this is all going. But the next week should be very tense and unstable. There’s going to be a lot of pressure from the street, from institutions like the judiciary and presumably from foreign governments to get Morsi to back down.

“The irony is that, in different circumstances, many of the Tahrir revolutionaries would welcome some aspects of his constitutional decree – like firing the Public Prosecutor and reopening investigations against the Mubarak family and senior officials.”

More than 500 people have been injured in clashes between police and protesters worried Mursi’s Muslim Brotherhood aims to dominate the post-Hosni Mubarak era after winning Egypt’s first democratic parliamentary and presidential elections this year.

The Supreme Judicial Council said Mursi’s decree should apply only to “sovereign matters”, suggesting it did not reject the declaration outright, and called on judges and prosecutors, some of whom began a strike on Sunday, to return to work.

Mursi would meet the council on Monday, state media said.

Hassan Nafaa, a professor of political science at Cairo University, saw an effort by the presidency and judiciary to resolve the crisis, but added their statements were “vague”. “The situation is heading towards more trouble,” he told Reuters.