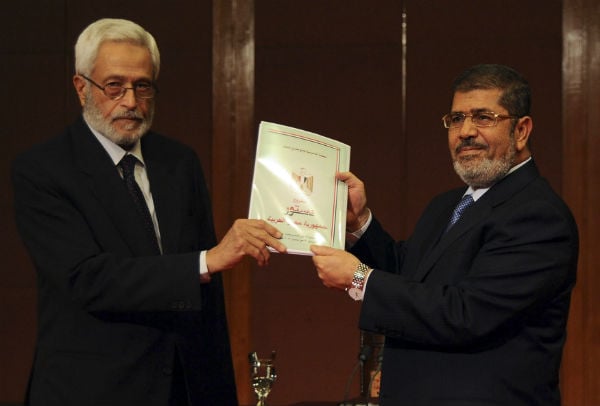 Egypt’s President Mohamed Mursi called a December 15 referendum on a new constitution, hoping to end protests over a decree expanding his powers, as at least 200,000 of his Islamist supporters rallied in Cairo on Saturday.

Approval of the constitution drafted by an assembly stacked with Mursi’s Islamist allies will override the November 22 decree that temporarily shielded Mursi from judicial oversight and triggered statements of concern from Western governments.

The decree plunged Egypt into its worst crisis since Mursi won office in a June election and sparked countrywide protests and violence in which two people have been killed and hundreds injured. This hit an economy just showing signs of recovery.

“I renew my call for opening a serious national dialogue over the concerns of the nation, with all honesty and impartiality,” said Mursi after receiving the final draft from the constituent assembly. “We must move beyond the period of confrontation and differences, and get on to productive work.”

The constitution is meant to be the cornerstone of democracy after three decades of army-backed autocracy under President Hosni Mubarak. Yet drafting it has been divisive, exposing splits between newly empowered Islamists and their opponents.

Protesters in an open-ended sit-in in Cairo’s Tahrir Square, which was also the focus of demonstrations against Mubarak, accuse Mursi’s Muslim Brotherhood of trying to impose a flawed constitution.

Leading opposition figure Mohamed ElBaradei said on Twitter that “struggle will continue” despite the referendum and that the draft constitution “undermines basic freedoms.”

The draft constitution contains Islamist-flavoured language which opponents say could be used to whittle away human rights and stifle criticism. It forbids blasphemy and “insults to any person”, does not explicitly uphold women’s rights and demands respect for “religion, traditions and family values”.

The text also limits presidents to two four-year terms, requires parliamentary approval for their choice of prime minister, and introduces some civilian oversight of the military – although not enough for critics.

Mursi described it as a constitution that fulfilled the goals of the Jan. 25, 2011 revolution that brought an end to Mubarak’s rule. “Let everyone – those who agree and those who disagree – go to the referendum to have their say,” he said.

To hold the referendum, Mursi will depend on a judiciary which has been on partial strike over the Nov. 22 decree, and which he and the Brotherhood suspect of links to the Mubarak regime. Judges oversee elections in Egypt.

Mursi is betting the Islamists’ core supporters and ordinary Egyptians fed up with instability will pass the constitution.

While Mursi only secured the presidency by a slim margin, the Islamists have won all elections since Mubarak was toppled.

The opposition must decide whether to urge a boycott or a “No” vote in the referendum. If they secure a “No”, the president could retain the powers he has unilaterally assumed.

The referendum call met with cheers from the pro-Mursi rally at Cairo University. Streets were clogged with those sympathetic to the Muslim Brotherhood and more hardline Salafi parties.

The rally was a show of strength by Islamists who feel under attack from leftist, liberal and socialist parties. By early evening, the crowd peaked at at least 200,000, said Reuters witnesses, basing estimates on previous Cairo rallies. Authorities declined to give an estimate for the crowd’s size.

“The people want the implementation of God’s law,” chanted flag-waving demonstrators, many bussed in from the countryside.

Tens of thousands of Egyptians protested against Mursi on Friday, chanting: “The people want to bring down the regime,” echoing a trademark slogan of the revolts against Arab leaders.

Rival demonstrators threw stones after dark in the northern city of Alexandria and a town in the Nile Delta. Similar clashes erupted again briefly in Alexandria on Saturday, state TV said.

Mohamed Noshi, 23, a pharmacist from Mansoura, said he had joined the rally in Cairo to support Mursi and his decree. “Those in Tahrir don’t represent everyone. Most people support Mursi and aren’t against the decree,” he said.

Egypt cannot hold a new parliamentary election until a new constitution is passed. The country has been without an elected legislature since the Supreme Constitutional Court ordered the dissolution of the Islamist-dominated lower house in June.

The court is due to meet on Sunday to discuss the legality of parliament’s upper house.

“We want stability. Every time, the constitutional court tears down institutions we elect,” said Yasser Taha, a 30-year-old demonstrator at the Islamist rally in Cairo.