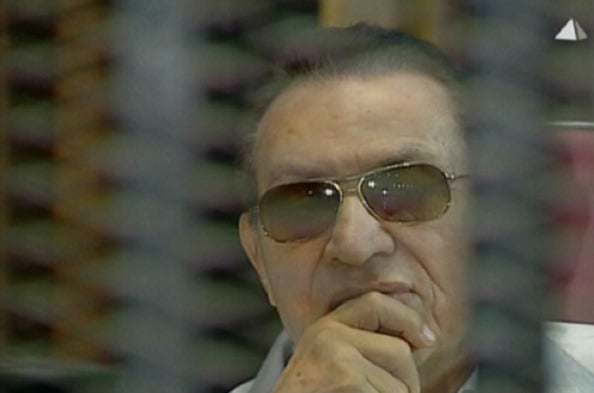 Hosni Mubarak, who became Egypt’s longest-serving ruler in more than 150 years before being forced from office by a popular uprising, has died. He was 91.

His death was announced Tuesday by state TV. No cause was mentioned, although his family recently said he’d been hospitalized.

Dubbed the “pharaoh” by his detractors, Mubarak had ruled for 30 years and was widely accepted to be preparing his younger son Gamal as successor when the Arab Spring surged into Cairo in January 2011. After 18 days of mass protests, he was gone, his image of an all-powerful ruler shredded.

Mubarak attended his trial for the killing of more than 850 protesters by security forces in the final days of his regime in a hospital bed and faced other serious charges, but was only found guilty of fraud and avoided serving additional time in jail. In photographs, a man famously known for jet-black dyed hair and swagger was seen seated, tired and graying.

Mohammed Hosni Said Mubarak was born on May 4, 1928, in Kafr El Meselha in the Nile Delta. Opting for a military career when Egypt was still a monarchy, he entered the Air Force Academy in 1950. Four years later, King Farouk was overthrown in a coup led by Gamal Abdel Nasser.

In 1964, Mubarak was appointed head of the Egyptian military delegation to the Soviet Union, the sole supplier of weapons to Nasser’s regime. From 1967 to 1972, he served as air force chief of staff, became deputy minister for military affairs and was promoted to air marshal after the 1973 Arab-Israel war.

After Nasser’s death, Egypt was led by President Anwar Sadat, who appointed Mubarak as vice president in April 1975, effectively designating him as heir apparent. That succession came earlier than expected, with Sadat gunned down by Muslim fundamentalists on October 6, 1981, during an annual parade marking the 1973 war anniversary. Sadat was killed while Mubarak, seated next to him, escaped with a hand wound.

Mubarak cracked down on violent groups and went on to govern in a low-key, stolid style that contrasted with the glitter of the Sadat years.

“Having Sadat as president was like being married to Miss World,” Layla Takla, an opposition member of parliament, said at the time. “It was great for a while, but then you needed someone to do the cooking and look after the children.”

While Mubarak provided some room for dissent – within specific red lines that included no criticism of his family – he failed to follow through on pledges to open the country’s political system. Suppression of a wide array of perceived rivals, under an emergency law promulgated in 1981, marked his years in power and helped fuel the discontent that led to his downfall.

In the late 1980s, the country was on the verge of bankruptcy when it stopped paying its foreign debts. It was only when Mubarak agreed to send forces as part of the US-led coalition to expel Iraqi troops from Kuwait in 1990 that creditors agreed to write off debts.

In 2004, Mubarak appointed a government that revived the sale of state assets. By 2009, it attracted more than $40bn of foreign direct investment in industries such as oil and gas, and telecommunications. Emirates Telecom Corp. and Italian bank Intesa Sanpaolo SpA were drawn to the country.

But critics saw him as out of touch with the lives of most Egyptians – embracing the elite while the poor were left to grapple with an inflation rate that reached more than 20 per cent in 2008. His supporters blamed explosive population growth and the economic mismanagement of past administrations for the ills of a nation that grew to 85 million people by the time of Mubarak’s ouster.

Egypt’s per-capita gross domestic product in 2009 was $2,160, almost identical to $2,155 a decade earlier, according to International Monetary Fund data.

Mubarak never backtracked on the policy of diplomatic rapprochement with Israel, though his only visit to the Jewish state was for the funeral of assassinated Israeli Prime Minister Yitzhak Rabin in 1995. He managed to restore links with fellow Arab rulers who were enraged by Sadat’s decision to sign a peace treaty with Israel.

“There isn’t among us anyone who wants to take the region back to the destruction of war or to the phase of no war and no peace,” he told Arab leaders in 1996. “We are sincerely determined to struggle for peace until the end.”

He also retained Egypt’s alliance with the US, which began with Sadat’s noisy break with the Soviet Union. Egypt receives about $1.3bn a year in US military aid.

Mubarak presided over several years in which domestic Islamic extremism flared in Egypt. In 1997, violence reached a zenith when 58 foreign tourists in Luxor were gunned down. The massacre, which harmed Egypt’s tourism industry, turned many Egyptians firmly against religious violence.

The Muslim Brotherhood, an Islamist movement that had renounced violence in the 1970s, gained in popularity amid dissatisfaction over corruption and economic inequality.

His experiences at home prompted warnings to his allies. In September 2001, he chided the West for failing to take terrorism seriously, warning that serious events were imminent. A few days later, on Sept. 11, al-Qaeda struck the US.

Mubarak opposed the 2003 US-led invasion of Iraq, warning that “the gates of hell” would be opened in the Middle East. He argued that the Israeli-Palestinian conflict should be tackled as the first step to regional peace.

He tried to end the rivalry between Palestinian Authority President Mahmoud Abbas and Hamas, an Islamic movement that took over the Gaza Strip in 2007 but faced criticism at home and in several Arab countries for keeping Gaza’s border largely closed as Israel sealed its frontier with the coastal enclave.

It was his ever-tighter grip on domestic freedoms that proved his undoing.

In 2005, Mubarak had opened presidential elections to multiple candidates. Yet the regulations were so restrictive that no strong challengers emerged; the runner-up, lawyer Ayman Nour, won only 7 per cent of the vote to Mubarak’s 88 per cent. After the election, Nour was jailed for four years on fraud charges that human-rights groups say were trumped up.

In elections later that year, the Muslim Brotherhood won 88 seats in the 454-member parliament – a surprise result that prompted a crackdown on Islamic activists and on anti-Mubarak secular politicians, judges, newspaper editors, bloggers and street demonstrators. Hundreds of Brotherhood activists were rounded up and some put on trial in closed-door military courts.

His fall came at the hands of an unexpected coalition of opposition parties, the Brotherhood and, most poignantly, a youth movement whose Facebook and Twitter-driven demonstrations mobilized the streets.

Mubarak never officially designated anyone as his likely successor, only appointing intelligence chief Omar Suleiman as vice president in January 2011 in a bid to diffuse mounting protests. The rise of his son, Gamal, up the ranks of the ruling National Democratic Party led Egyptians to conjecture that he’d succeed his father.

Instead that job went, briefly, to Islamist President Mohamed Mursi and then after a 2013 military-backed revolt to former army chief Abdel-Fattah El-Sisi, who has dragged Egypt back to the brand of autocracy mastered by Mubarak.

Mubarak is survived by his wife, Suzanne Thabet, and sons Gamal and Alaa.