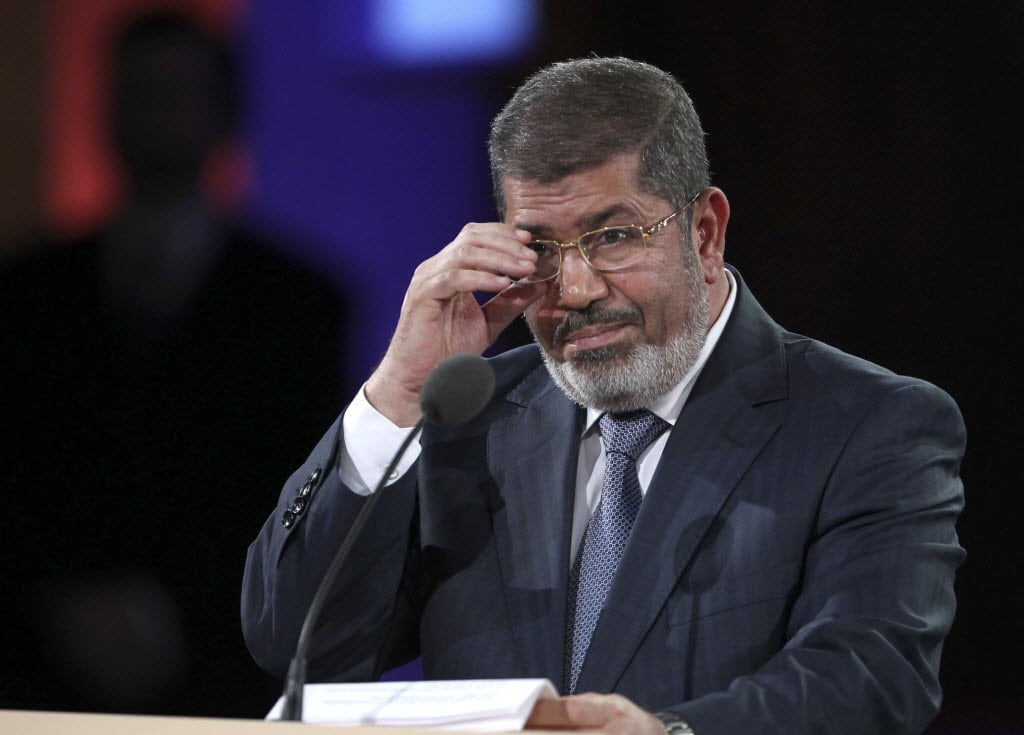 Deposed Egyptian president Mohamed Mursi appeared in court on Sunday on charges of conspiring with foreign groups to commit terrorist acts in Egypt, in a further escalation of the crackdown against his Muslim Brotherhood.

Declaring it “the biggest case of conspiracy in the history of Egypt”, prosecutors have detailed a “terrorist plan” dating back to 2005 and implicating Palestinian group Hamas and the Shi’ite Islamist government of Iran as well as its Lebanese ally Hezbollah.

Mursi’s Muslim Brotherhood propelled him to victory in the 2012 presidential election but has been driven underground since the army took power in July after mass protests against his rule.

The state, which has declared the Brotherhood a terrorist group, has killed about 1,000 of its members on the streets and jailed thousands of others, including top leaders.

Mursi is on trial in three cases and charged in two others.

In the latest one, the prosecutor also charged Brotherhood leaders Mohamed Badie, Khairat El-Shater, Mahmoud Ezzat and others with crimes including committing acts of terrorism in Egypt and divulging military secrets to a foreign state.

A total of 36 people are on trial.

Mursi’s lawyer threatened to withdraw from the case, saying he could not hear his client speak from behind his soundproof cage.

“What are you so afraid of? Are you afraid because you have no public support?” Mursi told the the panel of judges.

The Brotherhood accuses the army of staging a coup and reviving a dictatorship, an allegation the military denies.

The prosecutor has said the Brotherhood’s plan was to send “elements” to the Gaza Strip for military training by Hezbollah and the Iranian Revolutionary Guards.

Upon their return to Egypt, they would join forces with extremist groups in the Sinai Peninsula, the Egyptian-controlled territory that borders Israel to the east, it said.

After the 2011 uprising that ousted President Hosni Mubarak, the group exploited the chaos to carry out attacks on security forces in North Sinai and elsewhere, it said.

The prosecutor said they aimed to establish an “Islamic emirate” in North Sinai were Mursi not declared president.

Mursi’s presidential aides including Essam El-Haddad, his national security adviser, had leaked secret reports to Iran’s Revolutionary Guards and Hezbollah as a reward for their cooperation, the prosecutor said.

Hamas, which governs the Gaza Strip, has dismissed the charges as “fabrications and lies”.

The aim, which the officials say could take years to pull off, includes working with Hamas’s political rivals Fatah and supporting popular anti-Hamas activities in Gaza, four security and diplomatic officials said.

Egyptian security officials see Hamas as a major threat, accusing it of supporting militant groups in the Sinai peninsula which are waging an insurgency. Hamas denies the allegations.