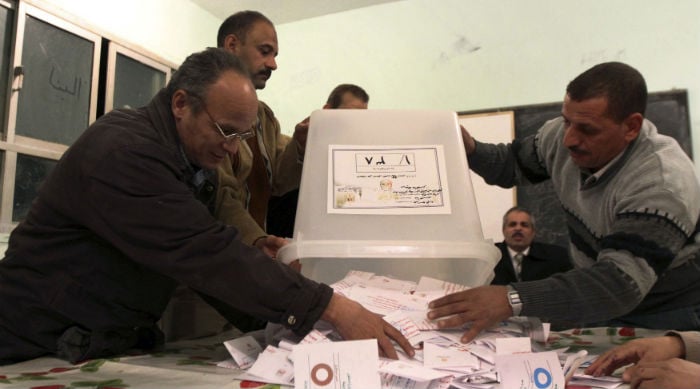 A constitution drafted by an Islamist-dominated assembly was approved by a majority of Egyptians in a referendum, rival camps said on Sunday, after a vote the opposition said drove a wedge through the Arab world’s most populous nation.

The Muslim Brotherhood, which propelled President Mohamed Mursi to power in a June election, said 64 per cent of voters backed the charter after two rounds of voting that ended with a final ballot on Saturday. It cited an unofficial tally.

An opposition official also told Reuters their unofficial count showed the result was a “yes” vote.

The referendum committee may not declare official results for the two rounds until Monday, after hearing appeals. If the outcome is confirmed, a parliamentary election will follow in about two months.

Mursi’s Islamist backers say the constitution is vital for the transition to democracy, nearly two years after the overthrow of autocrat Hosni Mubarak in an uprising. It will provide stability needed to help a fragile economy, they say.

But the opposition accuses Mursi of pushing through a text that favours Islamists and ignores the rights of Christians, who make up about 10 per cent of the population, as well as women. They say it is a recipe for further unrest.

“According to our calculations, the final result of the second round is 71 per cent voting ‘yes’ and the overall result (of the two rounds) is 63.8 per cent,” a Brotherhood official, who was in an operations room monitoring the vote, told Reuters.

His figures were confirmed by a statement issued shortly afterwards by the group and broadcast on its television channel.

The Brotherhood and its party, as well as members of the opposition, had representatives monitoring polling stations and the vote count across the country.

The opposition said voting in both rounds was marred by abuses and had called for a re-run after the first stage. However, an official said the overall vote favoured the charter.

“They (Islamists) are ruling the country, running the vote and influencing the people, so what else could we expect,” the senior official from the main opposition coalition, the National Salvation Front, told Reuters.

The vote was split over two days as many judges had refused to supervise the ballot.

“I’m voting ‘no’ because Egypt can’t be ruled by one faction,” said Karim Nahas, 35, a stockbroker, heading to a polling station in Giza, in greater Cairo, in the last round.

At another polling station, some voters said they were more interested in ending Egypt’s long period of political instability than in the Islamist aspects of the charter.

“We have to extend our hands to Mursi to help fix the country,” said Hisham Kamal, an accountant.

The build-up to the vote witnessed deadly protests, sparked by Mursi’s decision to award himself extra powers in a decree on Nov. 22 and then to fast-track the constitution to a vote.

Hours before polls closed, Vice President Mahmoud Mekky announced his resignation. He said he wanted to quit last month but stayed on to help Mursi tackle the crisis that blew up when the Islamist leader assumed wide powers.

Mekky, a prominent judge who said he was uncomfortable in politics, disclosed earlier he had not been informed of Mursi’s power grab. The timing of his resignation appeared linked to the lack of a vice-presidential post under the draft constitution.

The new basic law sets a limit of two four-year presidential terms. It says the principles of Islamist sharia law remain the main source of legislation but adds an article to explain this. It also says Islamic authorities will be consulted on sharia – a source of concern to Christians and others.

Rights groups reported what they said were illegalities in voting procedures. They said some polling stations opened late, that Islamists illegally campaigned at some polling places and complained of irregularities in voter registration.

But the committee overseeing the two-stage vote said its investigations showed no major irregularities in voting on Dec. 15, which covered about half of Egypt’s 51 million voters. About 25 million were eligible to vote in the second round.

The Brotherhood said turnout was about a third of voters.

The opposition says the constitution will stir up more trouble on the streets since it has not received sufficiently broad backing for a document that should be agreed by consensus, and raised questions about the fairness of the vote.

In the first round, the district covering most of Cairo voted “no,” which opponents said showed the depth of division.

“I see more unrest,” said Ahmed Said, head of the liberal Free Egyptians Party and a member of the National Salvation Front, an opposition coalition formed after Mursi expanded his powers on Nov. 22 and then pushed the constitution to a vote.

He cited “serious violations” on the first day of voting, and said anger against Mursi was growing. “People are not going to accept the way they are dealing with the situation.”

At least eight people were killed in protests outside the presidential palace in Cairo this month. Islamists and rivals clashed in Alexandria, the second-biggest city, on the eves of both voting days.

Late on Saturday, Mursi announced the names of 90 new members he had appointed to the upper house of parliament, state media reported, and a presidential official said the list was mainly liberals and other non-Islamists.

A spokesman for the National Salvation Front, which groups opponents who include liberals, socialists and other parties and politicians, said the Front’s members had refused to take part.

Legislative powers, now held by Mursi because the lower house of parliament was dissolved earlier this year, will pass to the upper house under the new constitution.

Two-thirds of the 270-member upper house was elected in a vote this year, with one third appointed by the president. Mursi, elected in June, had not named them until now. Mursi’s Islamist party and its allies dominate the assembly.