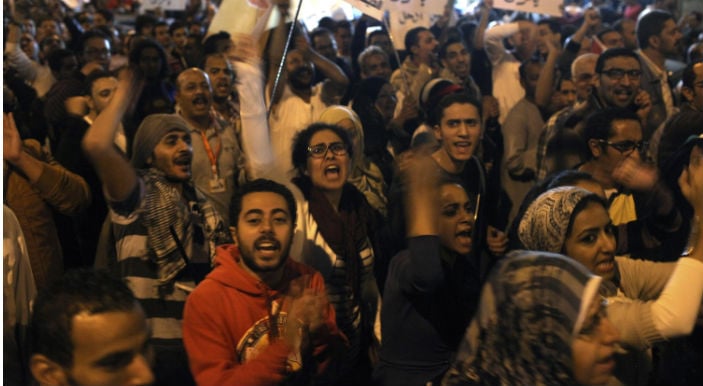 Tens of thousands of Egyptians rallied on Tuesday against President Mohamed Mursi in one of the biggest outpourings of protest since Hosni Mubarak’s overthrow, accusing the Islamist leader of seeking to impose a new era of autocracy.

Police fired tear gas at stone-throwing youths in streets near the main protest in Cairo’s Tahrir Square, heart of the uprising that toppled Mubarak last year. Clashes between Mursi’s opponents and supporters erupted in a city north of Cairo.

But violence could not overshadow the show of strength by the normally divided opponents of Islamists in power, posing Mursi with the biggest challenge in his five months in office.

“The people want to bring down the regime,” protesters in Tahrir chanted, echoing slogans used in the 2011 revolt.

Protesters also turned out in Alexandria, Suez, Minya and other Nile Delta cities.

Tuesday’s unrest by leftists, liberals and other groups deepened the worst crisis since the Muslim Brotherhood politician was elected in June, and exposed the deep divide between the newly empowered Islamists and their opponents.

A 52-year-old protester died after inhaling tear gas in Cairo, the second death since Mursi last week issued a decree that expanded his powers and barred court challenges to his decisions.

Mursi’s administration has defended the decree as an effort to speed up reforms and complete a democratic transformation in the Arab world’s most populous country.

“Calls for civil disobedience and strikes will be dealt with strictly by law and there is no retreat from the decree,” Refa’a Al-Tahtawy, Mursi’s presidential chief of staff, told the Al-Hayat private satellite channel.

But opponents say Mursi is behaving like a modern-day pharaoh, a jibe once levelled at Mubarak. The United States, a benefactor to Egypt’s military, has expressed concern about more turbulence in a country that has a peace treaty with Israel.

“We don’t want a dictatorship again. The Mubarak regime was a dictatorship. We had a revolution to have justice and freedom,” 32-year-old Ahmed Husseini said in Cairo.

The fractious ranks of Egypt’s non-Islamist opposition have been united on the street by crisis, although they have yet to build an electoral machine to challenge the well-organised Islamists, who have beaten their more secular-minded rivals at the ballot box in two elections held since Mubarak was ousted.

“There are signs that over the last couple of days that Mursi and the Brotherhood realised their mistake,” said Elijah Zarwan, a fellow with The European Council on Foreign Relations. He said the protests were “a very clear illustration of how much of a political miscalculation this was”.

Mursi’s move provoked a rebellion by judges and has battered confidence in an economy struggling after two years of turmoil. The president still must implement unpopular measures to rein in Egypt’s crushing budget deficit – action needed to finalise a deal for a $4.8 billion International Monetary Fund loan.

Some protesters have been camped out since Friday in Tahrir and violence has flared around the country, including in a town north of Cairo where a Muslim Brotherhood youth was killed in clashes on Sunday. Hundreds have been injured.

Supporters and opponents of Mursi threw stones at each other and some hurled petrol bombs in the Delta city of el-Mahalla el-Kubra. Medical sources said almost 200 people were injured.

“The main demand is to withdraw the constitutional declaration (decree). This is the point,” said Amr Moussa, a former Arab League chief and presidential candidate who has joined the new opposition coalition, the National Salvation Front. The group includes several top liberal politicians.

Some scholars from the prestigious al-Azhar mosque and university joined Tuesday’s protest, showing that Mursi and his Brotherhood have alienated some more moderate Muslims. Members of Egypt’s large Christian minority also joined in.

Mursi formally quit the Brotherhood on taking office, saying he would be a president for all Egyptians, but he is still a member of its Freedom and Justice Party.

The decree issued on Thursday expanded his powers and protected his decisions from judicial review until the election of a new parliament, expected in the first half of 2013.

“The current constitutional impasse is an internal Egyptian situation that can only be resolved by the Egyptian people, through peaceful democratic dialogue,” he told reporters.

New York-based Human Rights Watch said the decree gives Mursi more power than the interim military junta from which he took over.

U.N. Secretary-General Ban Ki-moon told an Austrian paper he would encourage Mursi to resolve the issue by dialogue.

Trying to ease tensions with judges, Mursi assured Egypt’s highest judicial authority that elements of his decree giving his decisions immunity applied only to matters of “sovereign” importance. That should limit it to issues such as declaring war, but experts said there was room for interpretation.

In another step to avoid more confrontation, the Muslim Brotherhood cancelled plans for a rival mass rally in Cairo on Tuesday to support the decree. Violence has flared in Cairo in the past when both sides have taken to the streets.

But there has been no retreat on other elements of the decree, including a stipulation that the Islamist-dominated body writing a new constitution be protected from legal challenge.

“The decree must be cancelled and the constituent assembly should be reformed. All intellectuals have left it and now it is controlled by Islamists,” said 50-year-old Noha Abol Fotouh.

With its popular legitimacy undermined by the withdrawal of most of its non-Islamist members, the assembly faces a series of court cases from plaintiffs who say it was formed illegally.

Mursi issued the decree on Nov. 22, a day after he won U.S. and international praise for brokering an end to eight days of violence between Israel and Hamas around the Gaza Strip.

Mursi’s decree was seen as targeting in part a legal establishment still largely unreformed from Mubarak’s era, when the Brotherhood was outlawed.

Though both Islamists and their opponents broadly agree that the judiciary needs reform, Mursi’s rivals oppose his methods.

Rulings from an array of courts this year have dealt a series of blows to the Brotherhood, leading to the dissolution of the first constitutional assembly and the lower house of parliament elected a year ago. The Brotherhood dominated both.

The judiciary blocked an attempt by Mursi to reconvene the Brotherhood-led parliament after his election victory. It also stood in the way of his attempt to sack the prosecutor general, another Mubarak holdover, in October.

In his decree, Mursi gave himself the power to sack that prosecutor and appoint a new one. In open defiance of Mursi, some judges are refusing to acknowledge that step.