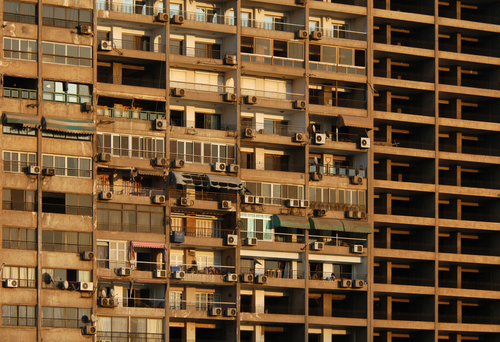 After buying gold plates for 100,000 Egyptian pounds ($14,700), Naer Wahid is considering whether to use the rest of his savings to acquire, with his sisters, an apartment or plot of land outside Cairo.

Like many Egyptians, the tour guide is tired of seeing his savings shrinking along with the value of the local currency, which has been in decline since president Hosni Mubarak was ousted in early 2011.

“I need to move assets because the pound is losing so much value against the dollar,” said Wahid, who already owns a multi-storey building near Cairo’s Ramses train station.

Two years of upheaval have devastated much of Egypt’s economy. The pound has lost about 14 per cent of its value, while the central bank’s dollar reserves have fallen to critically low levels, hampering the government’s ability to buy essential imports such as fuel and wheat.

But for the real estate industry, especially the upmarket part of it which caters to people with large amounts of savings, the weak pound is actually fairly good news.

“We have a better market now,” said Hisham Shoukri, chairman of Rooya Group, one of the largest property investment firms.

“I don’t say it is an excellent market, but a lot of people want to save the value of their money by buying real estate assets,” he told last week’s Cityscape property industry conference in Cairo, which saw a 25 per cent rise in participants compared to 2012.

In addition to Egyptians, the weaker currency makes Egypt more attractive for investors from other Arab countries trying to escape instability at home, especially Libya, Syria and Sudan.

“We have 12 Libyans who just bought apartments here,” said Ali Ibrahim, head of El Noor, a firm which just finished building a large residential tower in Nasr City, a Cairo suburb where middle-class people like to move to escape traffic jams in the centre.

“Some of the Libyans had political problems at home so they moved here,” he said, sitting in his ground-floor office, which faces a quiet street and a public garden – a stark contrast to the noisy centre of the capital.

“Other Libyans come for investment. I’ve also had a Kuwaiti buyer.”

Asking prices for apartments in the upmarket suburb of New Cairo rose 4 percent in the first quarter compared to the previous quarter, consultants Jones Lang LaSalle said in a report last week.

Some foreign developers want to get in on the action. Last October Al-Futtaim Group and Emaar Properties, two real estate developers from the United Arab Emirates, said they planned a 5 billion Egyptian pound tie-up to build a retail, entertainment and residential complex outside Cairo.

Political uncertainty over the outcome of infighting between new Islamist President Mohamed Mursi and the secular opposition still weighs on the real estate sector.

Several developers have delayed or stopped work at large housing schemes after courts or the government revoked land sales, accusing them of having paid too little because of cosy relationships with officials in the Mubarak era.

According to Jones Lang LaSalle, delivery of 200 villas was delayed in one project during the first quarter of this year because of such a legal dispute.

The most prominent example may be Talaat Moustafa Group (TMG), a large firm which has been locked for three years – starting even before the revolution – in a court battle over its $3 billion Madinaty real estate development project.

“We need to change a lot of regulations,” said Shoukri. “With this instability in the political situation it is very difficult to ask someone to take the hard decision to change all the rules.”

Developers also complain that the government needs to build more roads to make land accessible – a prospect which seems unlikely while the economy struggles and political conflict remains so fierce.

Ahmed Tawfik, general manager of Iqarat Misr, an Egyptian-Bahraini property investment firm, said sales for a new housing compound in a Cairo suburb were going well, but his Gulf partners had put on hold any new projects until they figured out where Egypt was heading.

“How do you do a new investment if you don’t have any vision of what will happen next?” he said.