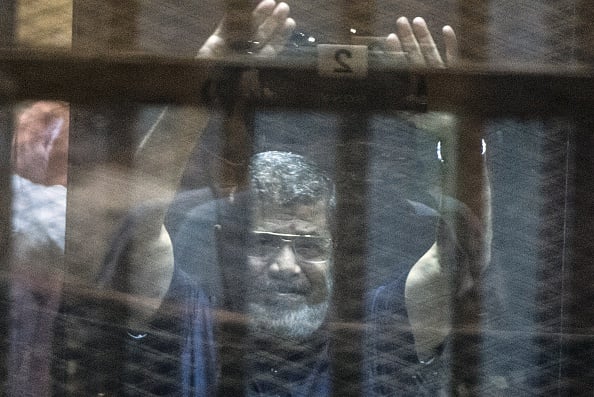 An Egyptian court on Saturday sought the death penalty for former president Mohamed Mursi and 106 supporters of his Muslim Brotherhood in connection with a mass jail break in 2011.

Mursi and his fellow defendants, including top Brotherhood leader Mohamed Badie, were convicted for killing and kidnapping policemen, attacking police facilities and breaking out of jail during the uprising, against then-president Hosni Mubarak.

A final ruling is expected on June 2. The court sought capital punishment in a separate case for Brotherhood leader Khairat el-Shater and 15 others for conspiring with foreign militant groups Hamas and Hezbollah against Egypt.

The rulings, like all capital sentences, will be referred to Egypt’s top religious authority, the Grand Mufti, for a non-binding opinion.

Egypt’s state information service said criticism of the ruling “reflects ignorance and lack of accuracy” and is an infringement on judicial independence.

Mursi can appeal the verdict. He has said the court is not legitimate, describing legal proceedings against him as part of a coup by former army chief Abdel Fattah al-Sisi in 2013.

Many other defendants are on the run.

“The group calls on the masses of the proud people of Egypt to steel their resolve and stand firm on the path of democratic legitimacy, dignity and respect for popular will,” said the Brotherhood in a statement.

The Islamist movement propelled Mursi to election victory in 2012 following Mubarak’s ouster, but it was driven underground after the army ousted Mursi a year later following protests against his rule.

Mursi stood defiant in a court cage wearing a blue prison outfit. He smiled and pumped his fists in the air as the judge read the sentences.

Other defendants, held in a courtroom cage separate from Mursi’s, flashed four-finger salutes symbolising resistance to the state’s anti-Islamist crackdown. From behind soundproof glass, they shouted: “Down with military rule!”

Wearing white, red and blue prison jumpsuits – identifying them respectively as awaiting sentencing, condemned to death, and sentenced to a lesser penalty – they seemed to form a choir momentarily, with one prisoner leading others in protest chants.

“This is a political verdict and represents a murder crime that is about to be committed, and it should be stopped by the international community,” Darrag, co-founder of the dissolved Freedom and Justice Party, the Brotherhood’s political wing, told Reuters in Istanbul.

The party said the ruling “opened all options to rid the country of this gang, which seized power by force.” It did not elaborate.

Amnesty International called the court decision “a charade based on null and void procedures.”

Erdogan criticised Egypt and accused its Western allies of hypocrisy, the state-run Anatolian news agency reported. “While the West is abolishing the death penalty, they are just watching the continuation of death sentences in Egypt. They don’t do anything about it,” the agency quoted him as saying.

Relations between the two Sunni Muslim states have deteriorated since Turkey emerged as one of the fiercest international critics of Mursi’s removal. The Brotherhood has close ties with Erdogan’s AK Party.

Western diplomats say Egyptian officials have acknowledged that executing Mursi could be political suicide Mursi and risk turning him into a martyr. The Brotherhood, the Middle East’s oldest Islamist group, has survived decades of repression, maintaining popular support through its charities.

Upon their return, prosecutors alleged, they would join forces with militant groups in the Sinai Peninsula, the Egyptian territory that borders Israel.

The Brotherhood says it is a peaceful organisation with no links to violence.

Hamas spokesman Fawzi Barhoum condemned the ruling, which included dozens of Palestinians, calling it “a crime against the Palestinian people.” Hamas is an offshoot of the international Brotherhood movement.

On Saturday, four people, including three judges, were killed in the northern Sinai city of al-Arish when militants shot at their vehicle, security sources said.

The interior ministry said a policeman was also killed by gunmen near Cairo.

Security forces have killed about 1,000 Brotherhood supporters on the streets and jailed thousands of others, according to rights groups.

Some Egyptians accused Mursi of abusing power, which the Brotherhood denies, while rumours that he intended to hand over part or all of the Sinai to Hamas have compounded suspicions about him.

At a Cairo coffee shop, some Egyptians showed signs of political apathy after years of turbulence.

“Mursi deserves the death sentence 20 times over. He was going to give away the Sinai,” said cafe employee Mahmoud Osman.

“I don’t trust the judges frankly. We used to have democracy, but we don’t anymore,” said the accountant.

In a separate case that risks sparking anti-government backlash, a court outlawed soccer fan clubs known as “Ultras,” which have participated in political demonstrations and violence since the 2011 uprising.