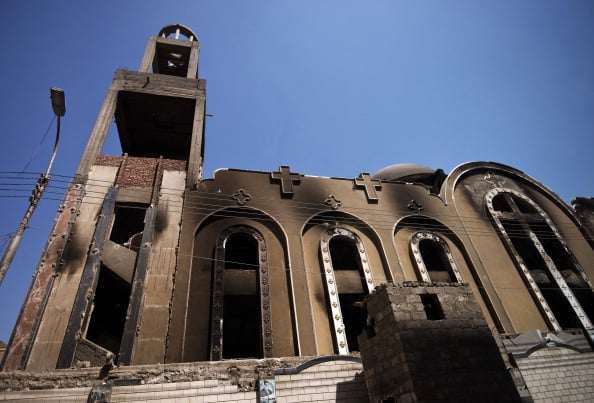 Egyptian Coptic Christians joyfully waited outside the Virgin Church in Cairo for the bride to arrive to join the groom for their wedding.

Instead bearded men on a motorcycle pulled up and fired on the crowd, deepening the fears of many Christians that their minority community will pay the bloodiest price for the ouster of elected Islamist President Mohamed Mursi.

“We heard gunfire and ran outside to find people and children lying on the ground swimming in their blood,” said Father Sawiris Boshra of the assault on Sunday night.

Bride Donya Amir Eissa and groom Mena Nashaat survived. Four other Christians who had come to share their happy occasion, including an eight-year-old girl, were killed.

Prime Minister Hazem al-Beblawi was quick to warn that such “heinous acts” would not be tolerated in Egypt, a U.S. ally in the heart of the Middle East.

His words provided little comfort for Coptic Christians, who make up 10 percent of Egypt’s 85 million people and have generally coexisted peacefully with majority Sunni Muslims for centuries, despite bouts of sectarian tension.

In an assertion of sectarian harmony, Sisi was flanked by a senior Muslim cleric and the Coptic Christian pope. Copts may have felt reassured to see Egypt’s new strongman beside their spiritual leader, but any such sense of relief did not last.

A bloody security crackdown on Mursi supporters on August 14 was followed by Egypt’s worst attacks on churches and Christian property in years, most of them occurring outside Cairo.

Across the country, several Christians were killed and scores of shops, homes, schools and monasteries were destroyed.

Sunday’s attack reinforced the apprehension of many Christians that they will be scapegoats in Egypt’s upheaval, held responsible by Islamists for backing Mursi’s fall.

The biggest crackdown on the Brotherhood in decades, including the arrest of its leaders, has not eased those fears.

Dozens of weeping men and women dressed in black appeared at the Virgin Church on Monday to pay their condolences, whispering “May God help us” as they hugged and held hands. “May God save their souls”, they said of the shooting victims.

“The Brotherhood are the ones who did it. It could not be anyone else because they hate us and they want to destroy the country,” said Ghaida Hafeez, 63. “But God willing, they won’t.”

Dozens of churches have been torched since Mursi’s demise, but attacks in the capital have been rare. “Does this mean they will try to exterminate us? Attack more churches?” asked a Christian taxi driver who lives near the Virgin Church.

The state also pins the blame for attacks on Christians on the Brotherhood, which denies any involvement and accuses the army of cynically using them to justify a harsher crackdown.

Virgin Church officials said they had received threats before the shooting and had informed the police to no avail.

“The Interior Ministry is not equipped to station a police car outside each church,” said a guard at the church compound.

In the lower-class neighbourhood of Warak, where the church is located, there were no signs of Muslim-Christian tension.

Residents say Muslims would protect Christians whenever pro-Mursi supporters held protests in the dusty area, where piles of garbage lie in narrow dirt lanes beside crudely built brick homes. Some fear that such cross-sectarian solidarity was the real target of the perpetrators of the wedding shooting.

“Those who carried out the attack were not only tackling Christians, but both Christians and Muslims, to spread terrorism and make the new state fail, ” said Essam Iskander, supervisor of the church library.

“Some of the injured people were Muslims. And many Muslims who sit in a nearby cafe protect the church.”