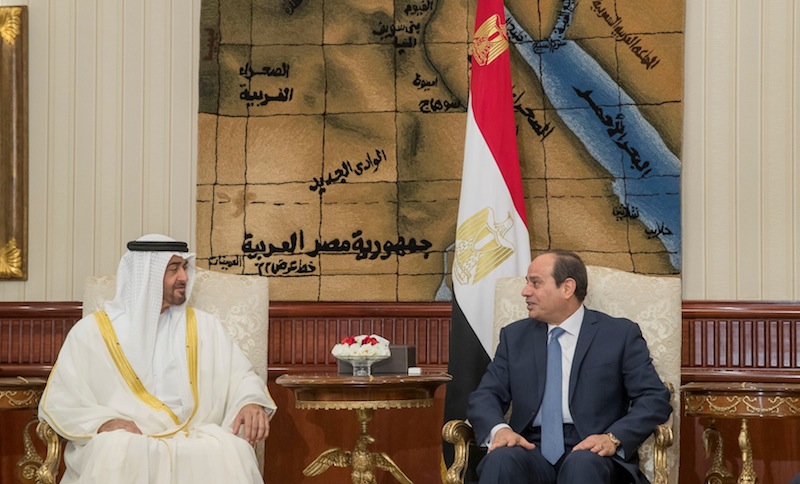 Egyptian President Abdel Fattah al-Sisi and Abu Dhabi Crown Prince Sheikh Mohammed bin Zayed al-Nahyan discussed on Monday the fight against terrorism, especially its funding and those who provide it with media cover, an apparent criticism of Qatar.

Saudi Arabia, the United Arab Emirates, Bahrain, and Egypt cut diplomatic and commercial ties with Qatar two weeks ago, accusing it of supporting terrorism, meddling in their affairs and cosying up to Iran, all of which Doha denies.

“Both sides stressed the importance of all Arab states and the international community fighting terrorism, especially stopping the funding of terrorist groups and providing political and media cover,” Sisi’s office said in a statement.

The meeting, which took place in Cairo, came hours after Qatari Foreign Minister Sheikh Mohammed bin Abdulrahman al-Thani said Doha had not received any demands from its Gulf neighbours and that Qatar’s internal affairs are non-negotiable, including the future of Doha-based channel al Jazeera.

The statement did not refer to Qatar or Al Jazeera explicitly.

The channel is at the centre of the controversy. Arab rulers accuse Qatar of using its multi-million-dollar franchise as a mouthpiece to attack them.

Conservative Gulf neighbours have long viewed Qatar’s foreign policy with suspicion, especially its refusal to shun Shi’ite Iran, and resented Al Jazeera for its readiness to air unwelcome or dissenting views from across the region. Saudi Arabia and the UAE shut down the channel when the rift happened.

Egypt views Al Jazeera as critical of its government, and the channel has been banned there since 2013. Al Jazeera says it is an independent news service giving a voice to everyone in the region.

Egyptian security forces have arrested several of its reporters and last year a Cairo court recommended the death penalty for two of them, charged in absentia with endangering national security by leaking state secrets to Qatar.