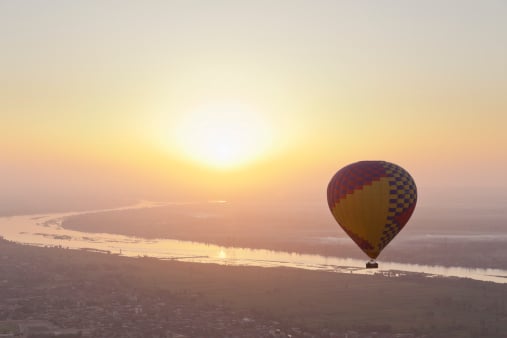 At least 19 people, most of them Asian and European tourists, were killed when a hot air balloon crashed on Tuesday near the ancient Egyptian town of Luxor following a mid-air gas explosion, officials said.

The balloon came down in farmland a few kilometres (miles) from the Valley of the Kings and pharaonic temples that draw tourists to Luxor. Rescue workers gathered the remains of the dead from the field where the charred remains of the balloon, gas canisters and other pieces of burnt wreckage landed.

One Egyptian was also killed, Health Minister Mohamed Mostafa Hamed told Reuters, listing the others killed as tourists from Japan, China, France, Britain and Hungary. Earlier, officials had said all the dead were tourists.

The pilot survived by jumping from the basket when it was 10-15 metres (yards) from the ground, said Ahmed Aboud, head of an association representing Luxor balloon operators. Two other survivors, both British, were being treated at Luxor hospital, said Mohamed Mustafa, a doctor at Luxor hospital. The fatalities were caused by burns and by the impact, he said.

“We believe a small number of British nationals are involved in an incident in Luxor this morning,” Britain’s Foreign Office said in an emailed statement. The Japanese embassy in Cairo said it believed four Japanese had been aboard and had sent staff to Luxor to confirm. France’s foreign ministry said two French citizens had been killed.

Aboud said the blast had happened in the pipe linking the gas canisters to the burner. He said that it was an accident.

Transport accidents are frequent in Egypt. Dozens of children were killed in November when the bus they were on collided with a train. Accidents affecting foreign tourists are fewer, but are not unusual. Five Germans were killed in December in a bus crash near a Red Sea resort.

Konny Matthews, assistant manager of Luxor’s Al Moudira hotel, said she heard an explosion at about 7 a.m. (0500 GMT). “It was a huge bang. It was a frightening bang, even though it was several kilometres away from the hotel,” she said by phone. “Some of my employees said that their homes were shaking.”

The balloon crashed on the west bank of the Nile river, where many of the major historical sites are located.

U.S. photographer Christopher Michel, who was on board another balloon, told Britain’s Sky News television that the balloon was one of eight flying at the time.

“We heard a loud explosion behind us. I looked back and saw lots of smoke. It wasn’t immediately clear that it was a balloon,” he said.

Hot air ballooning at dawn is popular with tourists, who are a mainstay of the Egyptian economy, although visitor numbers have fallen sharply since a 2011 uprising that toppled veteran President Hosni Mubarak. Two years of political instability have kept away many foreign tourists.

Tourism accounted for more than a 10th of Egypt’s gross domestic product before the revolt. In 2010, about 14.7 million visitors came to Egypt, but this slumped to 9.8 million people the next year.

The governor of Luxor ordered an immediate halt to all ballooning, the state-run al-Ahram newspaper reported.