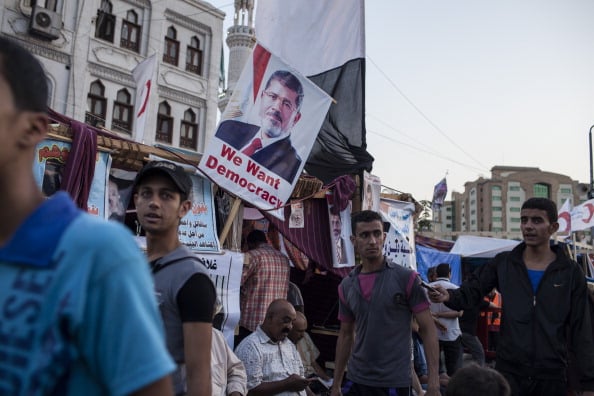 Egyptian police are expected to start taking action early on Monday against supporters of ousted President Mohamed Mursi who are gathered in crowded protest camps in Cairo, security and government sources said, a move which could trigger more bloodshed.

The sites are the main flashpoints in the confrontation between the army, which toppled Mursi last month, and supporters who demand his reinstatement.

Western and Arab mediators and some senior Egyptian government officials have been trying to persuade the army to avoid using force against the protesters, who at times can number as much as tens of thousands.

“State security troops will be deployed around the sit-ins by dawn as a start of procedures that will eventually lead to a dispersal,” a senior security source said on Sunday, adding that the first step will be to surround the camps.

Almost 300 people have been killed in political violence since the overthrow, including dozens of Mursi supporters shot dead by security forces in two incidents.

Any further bloodshed would almost certainly deepen Egypt’s political crisis and keep the government from dealing with vital issues such as the fragile economy.

Another security source said the decision to make a move on Monday, just after celebrations following the holy month of Ramadan, came after a meeting between the interior minister and his aides.

“The first step towards ending the sit-ins will start at dawn when protesters will be surrounded,” a government official said.

Mursi’s Islamist Muslim Brotherhood issued a statement on Sunday criticising any plans by “coup makers” to interfere with their right to protest and calling on international rights groups to visit their camps to see how peaceful they were.

Egypt has been convulsed by political and economic turmoil since the 2011 uprising that ended 30 years of autocratic rule by the U.S.-backed Hosni Mubarak.

It is now more polarised than any time for many years.

There is deepening alarm in the West over the course taken by the country of 84 million people, a pivotal nation between the Middle East and North Africa and recipient of $1.5 billion a year in mainly military aid from the United States.

Mursi’s supporters, mainly from the Brotherhood, have turned the camps into something resembling fortresses. Sandbags and piles of big rocks have been set up all over.

Guards with sticks wear motorcycle helmets in anticipation of a raid that would require security forces to crack down in a heavily congested area that includes children.

Egyptian authorities have warned the protesters to leave the camps or face the consequences. Some Mursi supporters are growing increasingly nervous, fearful that police could storm their gathering at any minute.

“They cut off the electricity,” said one protester by telephone. The government later issued a statement saying the blackout at the largest camp in northeast Cairo was unintentional.

Most Mursi supporters remain defiant, and spend their time at the camps reading the Koran and listening to Brotherhood leaders and clerics deliver lectures in the stifling heat.

Responding to the news that police were expected to storm the gatherings early Monday, protester Mustafa Al-Khateeb said: “We are staying and are psychologically prepared for anything and have secured the protests areas and their entrances and exists.”

Mursi took power as Egypt’s first democratically-elected president in June 2012. But concerns he was trying to set up an Islamist autocracy and his failure to ease economic hardships led to mass street demonstrations which triggered the army move.

Top leaders of his Muslim Brotherhood have been sentenced to jail on charges of inciting violence. Mursi is being held in an unknown location.

The camps are widely seen as the last card in the Muslim Brotherhood’s hands now that the leadership has been weakened and become highly unpopular on the streets.

The Brotherhood emerged from decades in the shadows to win every election since Mubarak’s fall but then struggled to tackle Egypt’s growing economic and social woes.

Thousands of supporters marched from their camp near Cairo University through the centre of the city to the other camp at Rabaa al-Adawiya on Sunday.

“Yes, yes for our president Mursi,” they chanted, waving the Egyptian flag and posters of their deposed leader.