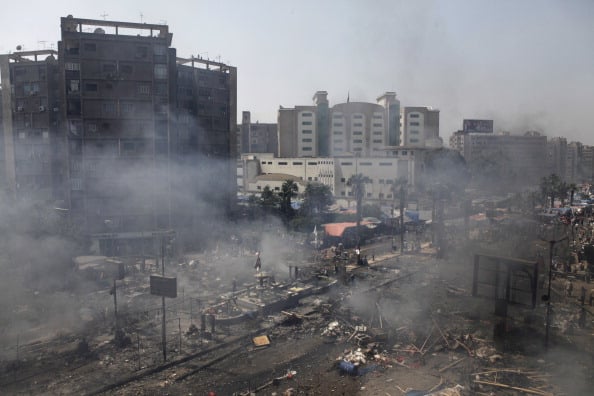 Security forces struggled to clamp a lid on Egypt on Thursday after hundreds of people were killed when authorities forcibly broke up camps of supporters protesting the ouster of Islamist President Mohamed Mursi, in the worst nationwide bloodshed in decades.

Islamists clashed with police and troops who used bulldozers, teargas and live fire on Wednesday to clear out two Cairo sit-ins that had become a hub of Muslim Brotherhood resistance to the military after it deposed Mursi on July 3.

The clashes spread quickly, and a health ministry official said about 300 people were killed and more than 2,000 injured in fighting in Cairo, Alexandria and numerous towns and cities around the mostly Muslim nation of 84 million.

The crackdown defied Western appeals for restraint and a peaceful, negotiated settlement to Egypt’s political stand-off, prompting international statements of dismay and condemnation.

The Muslim Brotherhood said the true death toll was far higher, with a spokesman saying 2,000 people had been killed in a “massacre.” It was impossible to verify the figures independently given the extent of the violence.

The military-installed government declared a month-long state of emergency and imposed a dusk-to-dawn curfew on Cairo and 10 other provinces, restoring to the army powers of arrest and indefinite detention it held for decades until the fall of autocrat Hosni Mubarak in a 2011 popular uprising.

The army insists it does not seek power and acted in response to mass demonstrations calling for Mursi’s removal.

Vice President Mohamed ElBaradei, a Nobel Peace Prize winner who lent liberal political support to the ousting of Egypt’s first freely elected president, resigned in dismay at the use force instead of a negotiated end to the six-week stand-off.

Other liberals and technocrats in the interim government did not follow suit. Interim Prime Minister Hazem el-Beblawi spoke in a televised address of a “difficult day for Egypt” but said the government had no choice but to order the crackdown to prevent anarchy spreading.

“We found that matters had reached a point that no self-respecting state could accept,” he said.

Churches were attacked in the Nile Valley towns of Minya, Sohag and Assiut, where Christians escaped across the roof into a neighboring building after a mob surrounded and hurled bricks at their place of worship, state news agency MENA said.

The United States, the European Union, the United Nations and fellow Muslim power Turkey condemned the violence and called for the lifting of the state of emergency and an inclusive political solution to Egypt’s crisis.

An EU envoy involved in mediation efforts that collapsed last week said the authorities had spurned a plan for staged confidence-building measures that could have led to a political solution.

The Brotherhood publicly rejected any plan that did not involve Mursi’s restoration to office. An Egyptian military source said the army did not believe the Islamists would eventually agree to a deal and felt they were only stringing the diplomats along to gain time.

In Cairo, police and soldiers aided by self-styled “popular committees” of civilian vigilantes armed with clubs and machetes enforced the curfew, searching cars and checking identity cards of people passing through makeshift checkpoints made of tires and concrete blocks.

Despite the lockdown, hundreds of Mursi supporters tried to gather at El Iman mosque in the Cairo neighbourhood of Nasr City in an attempt to start a new sit-in to replace the main camp dispersed at nearby Rabaa al-Adawiya square, MENA reported.

They chanted “down, down, military rule” and “police are thugs,” a Reuters witness said.

The protesters converted part of the mosque into a field hospital to tend to the wounded from the other sit-in, it said.

“They killed us, those coup makers and their thugs. Help us people, help us!” shouted Magda Ali, a woman marcher who was forced to leave the Rabaa camp.

Egyptian state television broadcast aerial footage of the burning remains of sprawling tent cities, as well as images of handmade guns it said were found at the sites. It also showed some video of alleged armed protesters shooting at police.

Reuters witnesses saw no protesters armed with more than bricks, stones and sticks as black-clad central security police in riot gear poured out of vans firing teargas and snipers fired from rooftops.

Interior Minister Mohamed Ibrahim told a news conference 43 members of the police force were killed in the clashes.

He vowed to restore Mubarak-era security after announcing, in a statement last month that chilled human rights campaigners, the return of notorious political police departments that had been scrapped after the 2011 revolution.

Wednesday’s death toll took the number of people killed in political violence since Mursi’s fall to about 600, mostly Islamist supporters of the ousted president.

Violence rippled out from Cairo, with Mursi supporters and security forces clashing in the cities of Alexandria, Minya, Assiut, Fayoum and Suez and in Buhayra and Beni Suef provinces.

U.S. Secretary of State John Kerry called the bloodshed in Egypt “deplorable” – a word U.S. diplomats rarely use – and urged all sides to seek a political solution.

A U.S. official told Reuters that Washington was considering cancelling a major joint military exercise with Egypt, due this year, after the latest violence, in what would be a direct snub to the Egyptian armed forces.

The “Bright Star” exercise has been a cornerstone of U.S.-Egyptian military relations and began in 1981 after the Camp David peace accords between Egypt and Israel. The United States has already halted delivery of four F-16 fighter jets in a signal of its displeasure.

Islamist militants with no direct link to the Brotherhood have staged almost daily attacks on security forces in the lawless Sinai Peninsula bordering Israel since Mursi’s fall.

In the latest violence, gunmen shot dead two policemen outside their station in El Arish in northern Sinai on Wednesday evening, MENA reported.