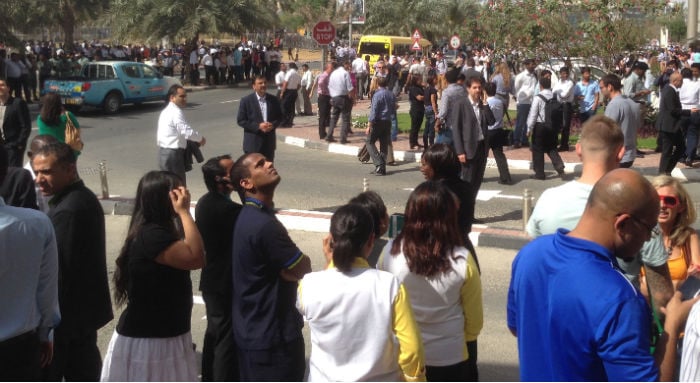 Iran was hit by a 7.8 magnitude earthquake on Tuesday, which sent strong tremors across the Gulf region. Here are some eyewitness accounts from the UAE.

Personally I did not feel any tremors since I was on the ground floor but I believe that many people on the higher floors experienced it more strongly than us. We saw people filing out through the fire escape from the top floors after experiencing the tremors. Soon we received alerts from Dubai Civil Defence about the earthquake asking us to begin evacuation measures. We conducted an internal check before sounding the alarm.

As a hotel manager, I was calm and am supposed to be calm. Probably people from the higher floors were a bit panicked but the people in the ground floor were calm. After evacuation, we checked the building for any damages like cracks and snags. We allowed in the people only after ensuring that the building was safe to enter.

As soon as the tremors began, I noticed the pictures in our family room rattle and fall to the ground. I realised that it was an earthquake and decided to evacuate immediately. I grabbed my two children aged 18 months and went out through the fire escape barefoot along with our nanny. Before I left my apartment I saw a crack appear on the wall of my family room.

Once I came outside the building, I realised that the other residents who lived higher up the floors had a more frightening experience than us. Many of them had to hold on to the furniture or walls to keep steady. We all assembled outside the building for a while before heading in again.

I was fortunate that my apartment was on the eighth floor which was closer to the ground than my other neighbours in the higher floors. We went down four floors down the fire escape before entering the elevators to ride down the remaining floors.

I am now worried about the huge crack in my home and concerned about the safety of my building. I am going to call in some people to look at it soon.

We were writing an exam when we felt the sudden tremors. Chairs started shaking and we even felt a little dizzy. However our professor, who was probably used to earthquakes in his hometown, did not feel that we had to evacuate as the tremors were very minor. We were requested to continue writing our exams.

Later on, when I spoke to many of my friends they told me that went down through the fire escape as they were informed about the earthquake. I believe they did not allow us to evacuate because it might have led to discussions among the students about the exam and the point of the exam being lost. We were confused for a while as we did not exactly know what was happening.

We were given an extra ten minutes at the end of the exam to make up for the interruption that we had in the meantime.

I was at the Cityscape exhibition in Abu Dhabi at the time of the earthquake. I did feel the tremors in spite of being in the ground floor. It could be because I was on phone with another lady from Dubai who shouted ‘earthquake’ when the tremors struck. So I kind of expected it, I guess!

I was sitting at my desk and speaking to my colleague when we experienced a slight swaying. My office is situated in Emirates Towers and we were 17 floors high. All of us were immobilised with shock and could not understand what was happening. After a while it dawned on us that it was an earthquake but we were still unclear what should be done. We decided to evacuate the building through the stairs and we climbed down 17 floors below to get outside.

Once we reached the stairwell, we saw people already dispersing from the top floors after feeling the tremors. As soon as I stood up, I caught on to the walls just in case I lost my balance.

After waiting underneath the building for 15 to 20 minutes, we decided to head home.