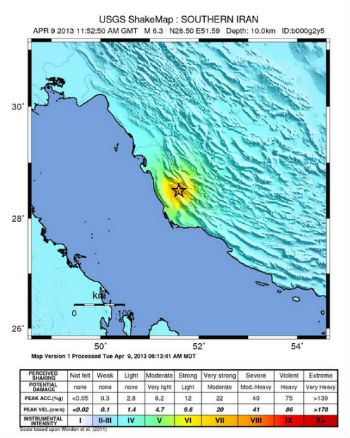 At least 37 people were killed by a powerful earthquake in southern Iran on Tuesday, close to the country’s only nuclear power station, state television reported.

The magnitude 6.3 quake struck 89 km (55 miles) southeast of the port city of Bushehr at 1152 GMT at a depth of 10 km, the U.S. Geological Survey (USGS) reported. It was felt strongly on the other side of the Gulf.

The Russian company that built the nuclear power station, 18 km (11 miles) south of Bushehr, said the quake had been felt there but that operations at the plant were not affected.

“The earthquake in no way affected the normal situation at the reactor. Personnel continue to work in the normal regime and radiation levels are fully within the norm,” Russian state news agency RIA quoted an official at Atomstroyexport as saying.

One Bushehr resident said her home and the homes of her neighbours were shaken by the quake but not damaged.

“We could clearly feel the earthquake,” Nikoo, who requested to be identified only by her first name, told Reuters by telephone. “The windows and chandeliers all shook.”

State TV did not give any details on the three casualties. Thousands of people live in two villages near the nuclear plant.

Offices in the capitals of Qatar and Bahrain were evacuated after the quake, which was followed by several aftershocks, according to Reuters witnesses and messages on Twitter. The shock was also felt in financial hub Dubai.

The quake was much smaller than the 9.0 magnitude one that hit Japan two years ago, triggering a tsunami that destroyed back-up generators and disabled the Fukushima nuclear plant’s cooling system. Three of the reactors melted down.

Gulf Arab countries and Western experts have voiced concerns about the Bushehr plant, built in a highly seismic area. Iran has repeatedly rejected concerns it could be unsafe.

Iran is the only country operating a nuclear power plant that does not belong to the Convention on Nuclear Safety, negotiated after the 1986 nuclear disaster in Chernobyl which contaminated wide areas and forced about 160,000 Ukrainians from their homes.

Western officials and the United Nations have urged Iran to join the safety forum.