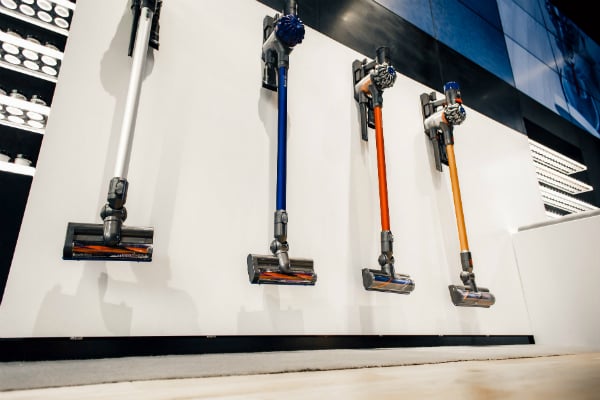 Premium household device manufacturer Dyson is considering the UAE as a regional hub to serve the wider Middle East, its CEO has said.

Jim Rowan told Gulf Business that the British brand had seen 200 per cent growth annually in the country over the last two years and would continue investing into the future.

“We’re starting to look now at using the UAE as a hub for MEA (Middle East and Africa),” he explained.

“The government investments in technology and engineering and of course coupled to the infrastructure we have here makes it a very viable proposition for us to continue to invest here.”

Dyson currently has a workforce of 28 people in the UAE but expects to add another 10 in the immediate future with further hires to follow if the hub plan is put into action.

“If we add a hub it will be more focused on supply chain and logistics aspects – then of course it will growth beyond that,” Rowan said.

“We’re in the middle of that investment profile, how that would look, how many people and what the capital requirements would be.”

However, the CEO suggested there were no plans to shift any manufacturing operations from Dyson’s main bases in Malaysia and the Philippines.

The brand’s latest Pure Cool air purifier towers retail for up to Dhs2,600 ($708) in the UAE and its Cyclone V10 cordless vacuums for Dhs2,400-3000, although Rowan indicated Gulf Cooperation Council sales still make up a “pretty small” percentage of its global revenue, which is led by the US and a rapidly growing Chinese market.

It was reported last month that the company’s billionaire founder had seen his wealth increase by another GBP200m after Dyson’s family-owned parent company recorded a 40 per cent rise in turnover last year to GBP3.5bn ($4.57bn) and 27 per cent rise in profit to GBP801m ($1.1bn).

The dividend payments to Sir James Dyson, who has a net worth of $11bn according to Bloomberg, and other shareholders by Weybourne Group came after Dyson’s first hair dryer “exceeded expectations” during its first full year on the market.

Rowan said Dyson was in New York to announce another addition to the brand’s lineup, later revealed to be $500 hair curlers. It hopes the product will be a similar success story.

The company has also committed GBP2bn ($2.6bn) to produce an electric vehicle by 2021 and said in August it planned to invest a GBP116m ($151m) to build 10 miles of test tracks and offices for 2,000 workers at a former Royal Air Force base in England.

It already employee 400 workers at the site, which it purchased in 2016, and is recruiting a further 300.

Rowan said the company thought it was up to the challenge of competing with global car manufacturers and planned to make a “meaningful dent” in the space.

“We’re aware of the risks and the challenges and the competition but we’d never been in the hair dryer market before and now we’re number one in value share within a year.”

He said it was yet to be decided whether Dubai and other regional markets would get access to the vehicle when it first launches.

The company expects to select a manufacturing base “in the next few months”, a process Rowan said would be based on the local skills base and government incentives, before it determines which would be the best launch locations.

Until then, the CEO suggests there are no plans to licence its technology to other manufacturers or partner with one to make it a reality.

“Of course never say never, but the fact is we’ll be designing most of the car ourselves,” he said.

In the more immediate future, Dyson is eyeing expansion into the wider Middle East and Africa from its current presence in 14 markets and is expecting similar double-digit to that seen last year.