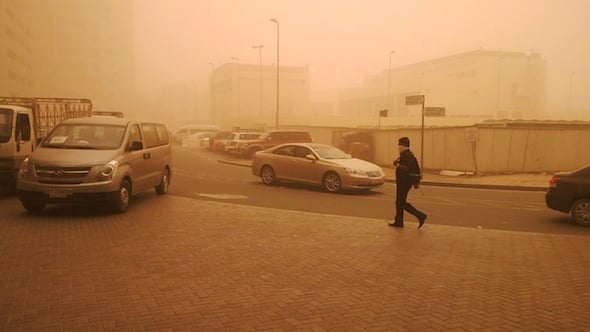 The UAE will continue to face hazy and dusty weather this week, with the possibility of rain on Monday, the UAE’s weather department National Center of Meteorology (NCM) has said.

The NCM urged residents to be cautious, especially while driving, because of poor visibility – ranging at between 2,0000 to 3,000 metres across the country.

With dust suspended in the air, winds with speeds reaching up to 40km/hr will cause sandstorms, especially with cloud activity, the NCM said in its forecast for Monday.

While the weather will be hot and hazy during daytime, “some low clouds will appear over the east coast with a chance of convective rainy clouds formation by afternoon, which may also extend to some internal areas,” it added.

Temperatures will range from a low of 27 degree celsius in the mountains to a high of 49 degrees in internal areas on Monday. Humidity in the coastal areas could reach up to 80 per cent.

#National_Center_of_Meteorology (this graph showing the expected weather situation over the country in the coming days) #Emirates pic.twitter.com/lHzjxKw7pv

Looking ahead, NCM predicted similar weather conditions for Tuesday, with the possibility of rain again anticipated in the country.

On Wednesday, the hot and humid weather conditions are also forecast to increase by night and early morning over some coastal and internal areas, with probability of fog or mist formation especially westwards.