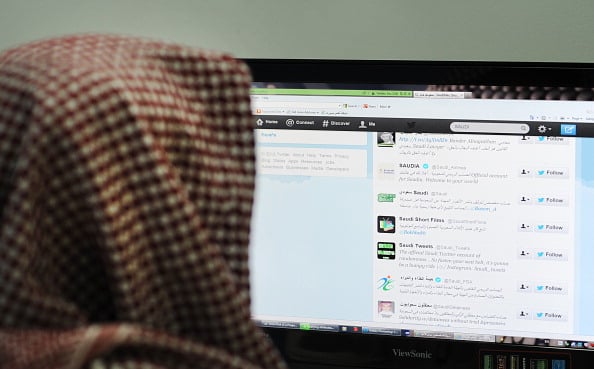 One of the unique, wonderful and alarming characteristics of social media, and in particular Twitter, is its ability to turn its users into multiple personality disorder patients; one second friendly, the next rude and obnoxious.

The hugely popular micro-blogging platform has become a company’s easiest and quickest way of communicating with its customers. But alongside the direct and immediate communication advantages comes perils that can unravel into PR disaster-territory at a similar speed.

The danger lies in the fingers, and mind, of the individual at the controls of a company’s Twitter account, as local telecom operator du recently experienced.

What may be one person’s thoughts, opinions and execution reflects on a company which, not only as in du’s case has almost 70,000 followers, but away from the internet relies on thousands of customers and has an array of shareholders to keep happy. All this in an age where image is as important as turnover.

The incident in question occurred during the melee of du’s surprise automatic upgrades for its most basic internet, phone and TV packages, and consequent U-turn. I’m not convinced any customer would really mind the upgrade, but it was the subsequent fee hikes that generated questions, confusion and inevitable anger.

With the upgrade surprise out of the bag and with a flurry of messages bombarding the Twitter handle @dutweets, it didn’t take long for the following message to appear, visible to all its thousands of followers, and the wider, ever-growing Twitterverse.

“Hey! if (sic) you don’t want to continue with the services, you can cancel your account at one of our stores.”

That was the reply to a fairly mild-mannered and inquisitive question from one of du’s existing customers: “What is this ‘New Home Services packages’ I received via email? Are you also subscribing me to this without my acceptance?” 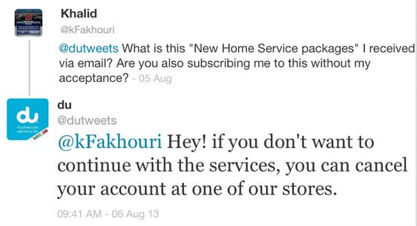 Now it is fair to say du is one of the more social media-advanced UAE companies, using its account several times a day to liaise with customers and announce news. But in that one moment, its gold-plated Twitter record almost came tumbling down.

Whether it was the actions of a rogue employee, someone who hadn’t drunk enough coffee (it was an early morning tweet), a joke gone wrong or some other plausible reason, it was a perfect example of a quick, hot-headed decision with a lack of foresight and potentially huge knock-on effects.

Luckily for du, and to their credit, they acted promptly. The tweet was removed – not that this does much anymore, it still appeared in newspapers the next day and can still be found on Twitter – and an apology issued:

“We’ve been guilty of a Social Media fail today. We’re really sorry about that inappropriate tweet. And we want you to know the person responsible for that tweet will no longer be handling our Social Media.” Fair enough.

The problem though is that when companies use Twitter it’s not about one person, one employee. It’s all very well punishing the individual who typed the words and hit enter, but a group’s Twitter account represents the views and opinions of just that, the group.

Du quickly went back to using its account as it’s always done well; asking customers to message their queries before later announcing the U-turn on its fees hike. But for a moment, the telecom operator got a taste of a very public fall from grace.

As the region’s companies continue to embrace social media and as customers increasingly find it the most efficient source of communicating with a service, and most importantly with no control or parameters to what can be said, we will surely see another Twitter-slip in the future.

I’ll hedge my bets that du will not make the same mistake twice though; the experience will have been a chastening one.