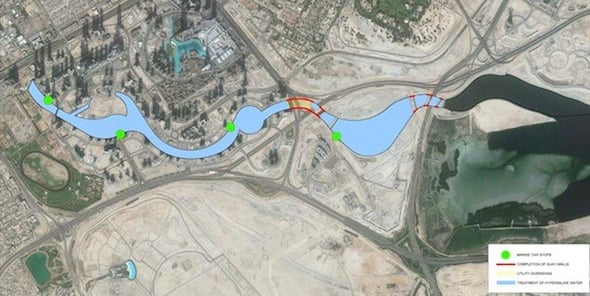 Dubai’s long-awaited Water Canal is to be completed in November, the Road and Transport Authority has announced in a series of tweets.

The $545-million project has reached the final stages of water cleansing and sedimentation removal in time for the official opening next month.

In another tweet, the RTA it added that work had started to pave the pedestrian pathways in preparation for the official opening.

Construction of the Dubai Water Canal project was split in three contracts – the first comprising the construction of bridges across the Water Canal on the Sheikh Zayed Road consisting of eight lanes in each direction.

The third contract encompassed the drilling of a 3.2km-long canal, landfilling works of the island, constructing a sea wall around the island to prepare the sand beach, building a marina for boats and the water bus, and constructing three pedestrian bridges above the canal to link the Jumeirah Beach Walk with Safa Park Walk.

Once completed, it will be six metres deep and will be crossed by eight-metre high bridges.

Surrounding the waterway will be a five-kilometre boardwalk lined with food and beverage and retail outlets and comprises of three zones: The Water Network, Green Network and Public Realm.

Within those three zones, there will be a shopping centre, four hotels, 450 restaurants, luxury housing, walkways and cycle paths. Modern water transport means will serve the water front and is intended to improve the quality of water in the Dubai Creek.