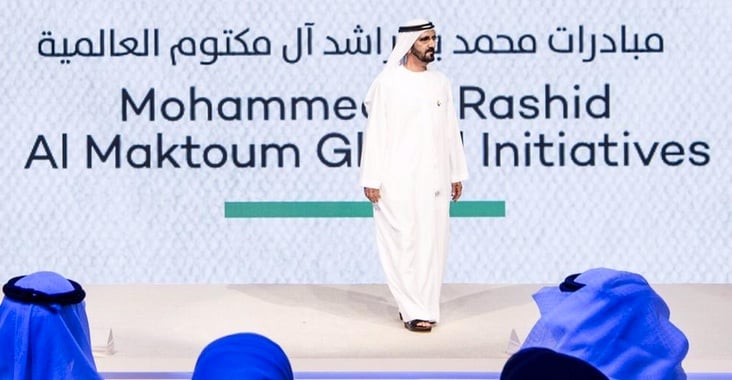 A new aid foundation with an annual budget of Dhs 1bn has been launched by the United Arab Emirates’ Vice President and Prime Minister and Dubai’s ruler Sheikh Mohammed Bin Rashid Al Maktoum.

The Mohammed Bin Rashid Global Initiatives project, launched on Sunday, consolidates the work of 28 organisations. Combined, the foundation’s initiatives will implement 1,400 human development programmes in over 116 countries around the world.

It will work on educating 20 million children, printing and distributing 10 million books and invest Dhs 1.5bn in education by 2025.

In terms of innovation, the foundation aims to train and support 50,000 young entrepreneurs in the region and invest Dhs 5.5bn in creating innovation incubators.

By 2025, it also seeks to treat 30 million people from blindness and eye diseases and invest Dhs 2bn on establishing medical research centres and hospitals in the region. It will also invest Dhs 500m on water shortage research.

To empower communities, the foundation will provide an investment of Dhs 600m to “promote a culture of tolerance”, translate 25,000 books into Arabic and award Dhs 150m to encourage creatives, journalists and intellectuals.

In total, it will target reaching 130 million people in need through 2025.

Sheikh Mohammed said: “The Arab region is undergoing massive challenges. We will not turn our backs on our region, we will provide our support and bring hope for our youth.

“The world today is facing great challenges on all levels; in terrorism, wars and mass immigration and the only solution lies in human development which can be achieved by educating people and helping them build their future.”

Over the past few years the total amount spent by the organisations affiliated with the new foundation has exceeded Dhs 8bn in over 100 countries. Over 54 million people have benefited directly from these initiatives, including the construction or restoration of over 2,000 schools and educational facilities, a statement said.

The new foundation, to be chaired by Sheikh Mohammed, will be managed by a board of trustees, which includes representatives of all the organisations within it.

Sheikh Mohammed said during the launch: “The world has spent tens of billions on addressing global challenges. If only a quarter of this amount was spent on development in our region, we would overcome our challenges and our people could overcome their difficulties to restore their role in building vibrant societies which contribute to the development and wellbeing of mankind.”

The UAE has been stepping up aid efforts as conflicts across the Middle East continue to destabilise the region.

Late last week the Emirates pledged $1.8bn in funding for United Nations aid agencies that are struggling to cope with the ongoing refugee crisis.

The country also revealed last month that it has allocated a total of $100m this year to aid the large numbers of refugees fleeing the civil war in Syria.

Out of this amount, about $40m has already been spent. A previous statement issued by the UAE said that the country had provided aid worth $530m for Syrian refugees since the start of conflict in 2011.