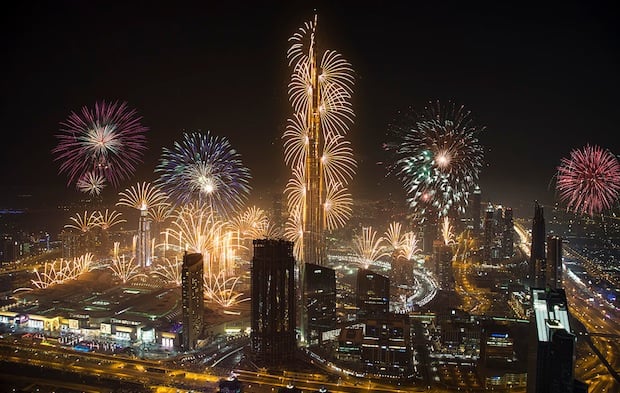 The RTA’s plan will also seek to manage increased use of public transport systems, a statement said.

Metha bin Udai, CEO of Traffic & Roads Agency said: “The RTA has mapped out the operational plan necessary for serving commuters on the eve of the New Year, which normally experiences traffic congestion. The plan covers Burj Khalifa district where massive numbers of signboards are being installed to direct traffic from and to the area.”

* On the New Year’s eve, RTA will close Mohammed bin Rashid Boulevard from 6pm to 8pm according to the overall traffic flow.

* The upper and lower decks of the Financial Center Road will be closed at 8pm.

* The Al Asayel Road will be closed at 4pm (it will be used for public transport and VIP passage).

* The Al Sukook Road will be closed at 8pm.

The RTA also confirmed that the Burj Khalifa metro station will be closed from 10pm to 6am (of the following day).

Traffic will be diverted to multiple directions including Oud Metha Road, Al Asayel Road, Zabeel bridges, Al Saada Road, and internal roads at the Business Bay area to access Sheikh Zayed Road and Al Khail Road in order to ease the pressure on the Financial Center Road, the RTA said.

Light signals on the Financial Center Road and Mohammed bin Rashid Boulevard would also be monitored and controlled to ensure the maximum possible traffic flow at peak hours.

The RTA said it will provide about 17,000 car parks at Emaar District comprising parking lots of Dubai Mall and the surrounding areas and 5,000 parking slots outside the events area.

Alternative parking spots include 2,000 at Al Wasl Club, 1,500 at Musalla (Mankhool) at Trade Center, 500 at the Department of Residency and Foreigners Affairs in Jafiliya, and 1,000 at Zabeel Park.

Shuttle buses will transport public from these parking spots to the events area. 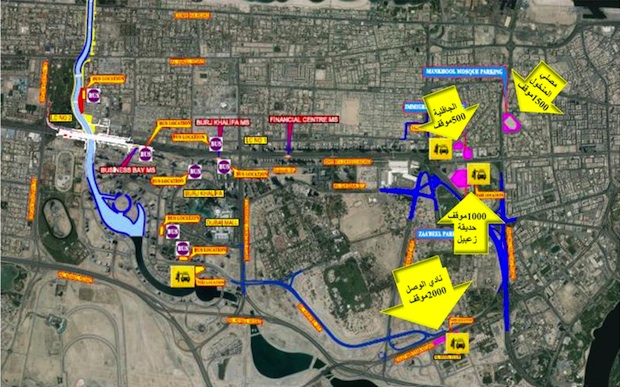 “Virtual messaging signs will be used to alert motorists about the required road closures and direct the public to use alternative car parks,” the statement added.

The RTA also said it will designate a point over the Sheikh Zayed Road near Burj Khalifa metro station for pedestrian crossing, which will monitored by Dubai Police.

Bus routes are expected to serve about 60,000 commuters on New Year’s eve, especially when people leave the Burj Khalifa site, according to the RTA.

About 22,000 people are expected to be transported between 12.30am up to 4am. Directional signs will guide people to public buses at the pick-up, drop-off points on Al Abraj Road (behind Vida Hotel).

“The Bus Operational Plan is expected to expedite bus arrivals at Burj Khalifa, especially during departure,” the RTA said. 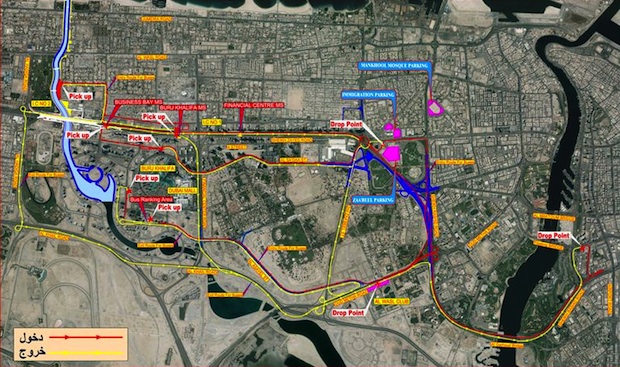 A total of 160 buses will be operated to feed the metro lines and alternative parking areas over and above the existing routes serving the area as follows:

* 50 buses on Al Saada Road to transport people to the events area and to the Trade Center and Al Wasl Club parking areas. The service will return to the pick up point on Al Abraj Road.

* 20 buses from the Business Bay metro station to the parking of Al Wasl Club.

On Saturday, 900,000 people are expected to ride on the Dubai Metro, while up to 480,000 commuters are also anticipated on Sunday, January 1.

The service frequency will range from 2.38 minutes to 8 minutes, the RTA said.

The Tram will also see big crowds with 28,000 people expected on Saturday and 19,500 people anticipated to use the service on Sunday.

Taxis are expected to transport about 36,450 people in 17,160 journeys during the New Year celebrations.

The movement of all boats on Dubai Water Canal in the sector from Jumeirah Road to Ras Al Khor will be stopped from 10pm on December 31 to 6am on January 1.