Dubai’s Roads and Transport Authority has revealed the new parking fares and zones which came into effect on Saturday, May 28 across the city.

Parking fares in certain parts of the emirate, including Dubai Marina, Sheikh Zayed Road and Mankhool Road have been hiked.

However, the increase does not affect 77 per cent of the total parking slots in Dubai – amounting to about 130,000 spaces.

The RTA has released a video outlining the areas where the hike is applicable and the fares for each zone.

Check out the parking fares for the parking zones A and B in #Dubai. pic.twitter.com/DFLz8bodUT

Under the revised system, charges at zones A, E and G are priced at Dhs 4 per hour, zone B at Dhs 3 per hour and zones C, D and F at Dhs 2 per hour.

The free parking period between 1pm to 4pm has also been abolished under the new policy with charges applicable from 8.00am to 10.00pm.

The fare in multi-level parking terminals has also been raised from Dhs 3 to Dhs 5 per hour. 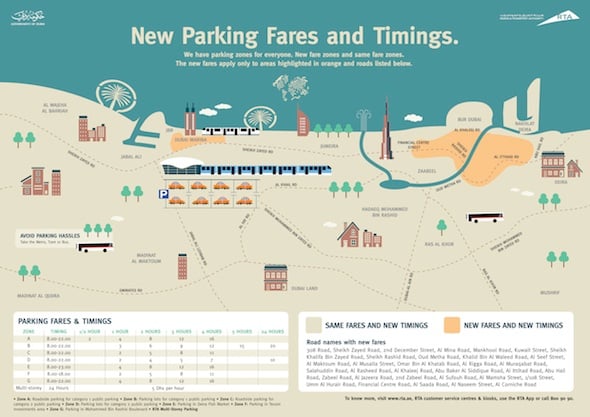 Eleven types of parking permits have also been made available and will cater those who are disabled, senior citizens and government entities, among others. Permits are also available at discounted rates for university students.

The move is hoped to encourage more people to use public transport and to address the decreasing number of vacant parking slots in congested areas.

“The new policy of revising the tariff of public parking in Dubai is built on concept of ensuring that parking slots are not unjustifiably occupied, and are made available to the largest possible number of users especially at noon, to enable people visit hospitals, malls and banks.”