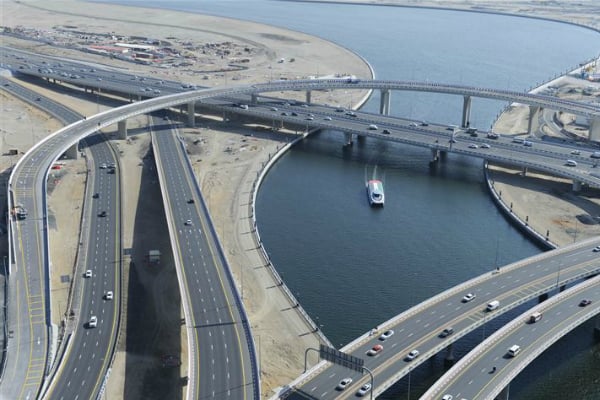 Dubai’s Roads and Transport Authority has announced the imminent opening of a new bridge to accommodate growing traffic from Dubai Mall.

The structure, stretching from Al Khail Road to the Financial Centre Street, comprises two lanes running in one direction for 1,270 metres over the Dubai Water Canal

It starts from the intersection of Ras Al Khor Street with Al Khail Street, which will be widened by two lanes and extended 480m to enable traffic flow from the Dubai-Al Ain Road to Al Khail Road via the upper deck of the Financial Centre Street.

The work also includes an entry point for the parking terminal of an expansion to Dubai Mall.

An expansion of Dubai Mall’s Mohammed bin Rashid Boulevard is also under construction.

“The project will ease the flow of traffic along the Financial Center Street and surface intersections, thus easing the pressure on the intersections of Mohammed bin Rashid Boulevard,” said RTA director general and chairman HE Mattar Al Tayer.

He said the Friday opening would raise the capacity of the road to 4,5000 vehicles per hour, serve several development projects and ease pressure on existing roads.