Dubai’s Roads and Transport Authority has awarded a contract to develop a new roads project worth Dhs 335m in Business Bay, it was announced on Saturday.

The new project forms phase two of the Parallel Roads project and is scheduled for completion in the first quarter of 2018.

“The first is intended to provide leftward turns from Al Sa’ada Street in the direction of Al Meydan Street. Comprising two lanes, it will ease snarls during peak times resulting from the overlapping of traffic movement,” he explained.

“The second underpass would be at Al Sa’ada Street, comprising two lanes in each direction. The third underpass is designated for the crossing of horses at Godolphin Stables area,” Al Tayer added.

Works also include upgrading and shifting utility lines in the area, street lighting and directional signage. 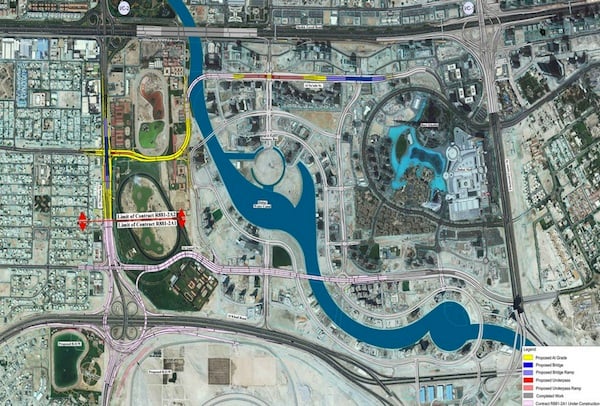 The RTA has so far completed more than 31 per cent of the Dhs 578m Parallel Roads project in the Godolphin area. It includes the construction of a 3.5 km-long bridge comprising three lanes in each direction crossing over the Dubai Water Canal. The number of lanes increases to five in each direction above Godolphin Stables and Al Meydan Street up to Al Quoz Industrial Area.

The bridge crossings over the Dubai Water Canal are expected to be completed by end of this August. The overall project is set for completion in the last quarter of 2017, according to Al Tayer.

“The Parallel Roads project is one of the vital projects currently undertaken by RTA to ease the congestion of the Sheikh Zayed Road,” said Al Tayer.

“This traffic corridor, which comprises three lanes in each direction, extends 108 kilometers from the Sheikh Rashid Road in the north up to the entrance of Abu Dhabi.

The project covers the construction of bridges and at-grade junctions at the intersections of parallel roads with the crossing roads extending 42 km. The entire project constitutes a traffic hub supporting the Sheikh Zayed Road and Al Khail Road, and upon completion of all phases, it would ease the traffic movement in the area parallel to the Sheikh Zayed Road to the East,” he added.