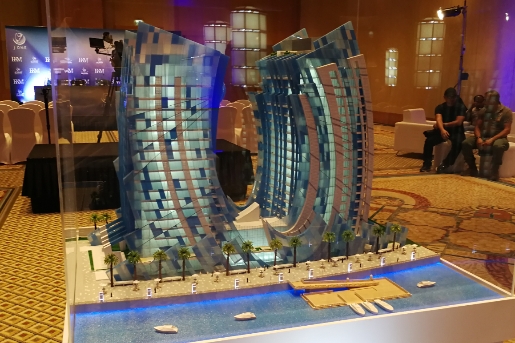 The developer said the unique two-tower curved structure, located across 900,000 square feet within the Burj Khalifa District, was inspired by the Arabian Gulf’s pearl market heritage and designed in the shape of an oyster.

QHC Architects and Engineers is the architect and lead consultant and Meinhardt Singapore PTE has been appointed as engineering consultant.

Six villas with private pools are located around the towers.

RKM Durar said the project would cater to owners looking to rent apartments as holiday homes. The initial payment plan is 25 per cent of the unit price during construction and 75 per cent after delivery.

“J One is one of the pearls of RKM Durar Properties and can be considered a real work of art, designed specificially to provide an optimal living space of the highest quality to residents of the towers,” said RKM Durar general manager Mohammed Miqdadi.

Durar has appointed Wrenn Associates to design the project’s interiors and Ali & Sons Contracting is the designated contractor.

Construction has begun and the basement floors are completed. The project is expected to be finished in the second or third quarter of 2019.

RKM Durar was established in 2005 as a joint venture between RKM Real Estate and Durar Al Emarat Properties.