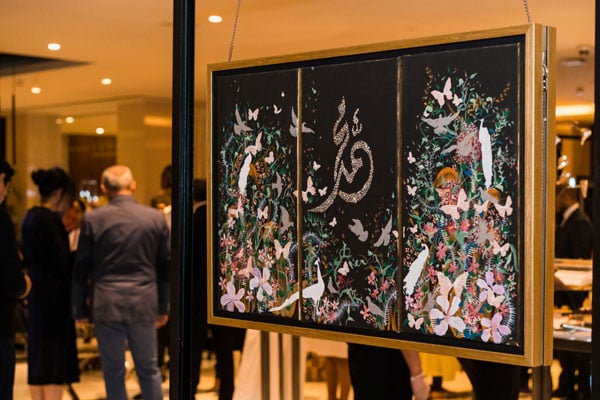 Hotels, at their existential core, host an itinerant community. A tribe of travellers that will likely stay in the city a few days before jetting off to the next destination.

But can those globe-trotters soak in a bit of the local arts and culture during their stay at a hotel? That’s exactly what Pullman Hotels have tried to achieve with its Artist Playground initiative that has already been rolled out in a few of its properties globally, and which was brought to the Middle East for the very first time last month at the Pullman Dubai Creek City Centre hotel.

The Artist Playground initiative in Dubai has been undertaken by way of a collaboration between Pullman Hotel and the Islamic Fashion Design Council’s (IFDC) Pret A Cover Buyer’s Lane led by IFDC’s founder and Chairwoman Alia Khan.

Alia and her team were responsible for curating the artists and their artwork that are on exhibit at the lobby level of the hotel.

“The idea is how do we get local artists together and give them a location in the hotel where the can come together and also give guests in the hotel a chance to go and see these pieces of art,” explains Nishan Silva, Cluster General Manager for Majid Al Futtaim-AccorHotels.

But he’s equally quick to caution that this isn’t merely a gallery in the traditional sense of the word, but rather a more purposeful space capable of igniting a dialogue between artists as well as between artists and art patrons. “This is not an art theatre or not a place that people go to as a gallery. This is a playground where people co-work, talk to each other and make friends. We look at a mix of established prominent artists as well as young and unbelievably talented artists. The playground concept is kept open so that artists can paint on the premises, conduct workshops and bring fellow artists too.”

Alia and her team have played a crucial role in identifying and assembling these artists for the Artist Playground which although is a permanent fixture at the hotel, will have a rotating set of artists showcasing their work at the hotel every three months.

“We source the artists, we curate and set the theme for the exhibitions which last three months and then we will put together another one. During those three months, we also do monthly series where we work with influencers and bring people into this space,” explains Alia Khan.

The binding theme across all the exhibitions will remain Islamic Art.

In the first week of November, at a VIP launch of the Artist Playground initiative, there was a diverse set of artists – from furniture makers, sculptors to mixed media artists – showcasing their work at the venue. Says Khan, “We wanted to show the range these artists have. We have Meena Kamal who has been inspired by His Highness Sheikh Mohammed, Humaira Hussain who was an apprentice of Gulgee, Falanknaz Warehouse who make furniture into artwork. Shabir Mir does all sculpture all by hand. Sana Merchant does calligraphy art. Poetic Strokes [headed by Ayesha Imtiaz] is an artist platform and have brought six-seven artists to this exhibition too,” says Khan.

A partner on this project at the Pullman in Dubai is Sri Lanka’s Dilmah Tea who has opened their t-Lounge at the hotel a few years ago. On the sidelines of the VIP launch event, Dilhan Fernando – son of Dilmah founder Merrill J Fernando – said, “Dubai is about reimagining everything. We use the tea to complement the colours and styles and work with celebrity chefs to create preparations around the theme of tea gastronomy. The creativity you see in the art is reflected in the tea gastronomy.”

That association between tea and art can also work as a catalyst for meet-ups organized at the hotel around these artists and their artwork. “When we do our monthly series, we will bring in different clubs and entities to see the art and create a buzz around it. We will show that this is something more than just a gallery – it’s an art space,” says Khan.

To what end is Pullman rolling out this Artist Playground initiative? Silva summarizes it when he says, “A lot of people ask me what is the objective and I say to them that we don’t have an objective, we have an obsession.”