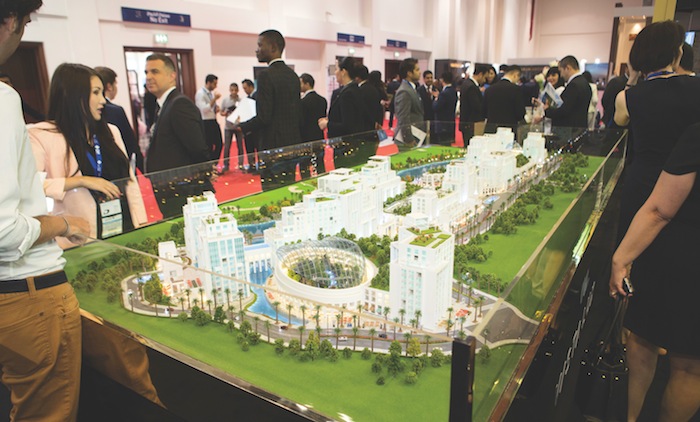 Walking through the exhibits at Dubai’s biggest property extravaganza, Cityscape Global, we were surprised to see packed halls and vast stalls. The exhibition popularly referred to as the barometer of Dubai’s real estate market, seemed to offer a different perspective from the ground reality.

All the real estate reports that have been published over the last six months have been consistent in their stand that Dubai’s residential market is slowing. Sales transactions within the segment fell by close to 20 per cent year-on-year during the first eight months of 2015, consultancy CBRE said in its latest report.

Total sales dropped to Dhs 31.74bn between January and August 2015 compared to Dhs 39.56bn during the same period a year ago, according to data from the Dubai Land Department.

The report also found that sales prices declined by 2 per cent quarter-on-quarter and around 6 per cent year-on-year in Q3.

“While global economics have certainly reduced investor sentiment and impacted sales, the slowdown is also attributed to a price correction resulting from market stabilisation,” CBRE says.

However, there was no note of pessimism at Cityscape this year, with flamboyant displays and new launches.

The 14th edition of the event had over 300 international and regional developers exhibiting across 41,000sqm at the Dubai World Trade Centre. The three-day event also attracted around 47,000 participants from around the world, according to the organisers.

A slew of new developments in Dubai were announced around the event – Dubai Properties unveiled its luxury residential development 1/JBR while Emaar Properties launched the Creekside 18 Residences, an apartment complex located within the island district of the Dubai Creek Harbour project. The project consists of 480 residential units in two 37-storey towers.

Spread across one square kilometre, the development – estimated to cost Dhs 25bn – will comprise of a cluster of residential buildings centred around a community core featuring a school, civic centre, health and wellness complex and high street and retail outlets.

Development of the first village will begin by early 2016 and will be handed over in 2019.

The project is geared towards providing leisure and entertainment options even as Dubai gears up to host Expo 2020.

The Burj2020 development – named in honour of Dubai winning the expo – was also unveiled during Cityscape. The architects behind the development, Adrian Smith (of Burj Khalifa fame) and Gordon Gill, were present at developer DMCC’s stall and said the ‘supertall’ Burj2020 tower has been designed to become “the diamond” of the Dubai skyline.

According to DMCC chief executive Gautam Sashittal the new mixed-use development will cater to growing demand from the freezone’s clients.

“We have 107 new companies coming in every month, out of which 85 per cent are new to Dubai. So we are confident that there is adequate demand,” he says.

The developer launched two projects at the event, Jebel Ali Gardens – a 40,000-person community – and The Palm Promenade – a 1.5km retail and leisure strip along the Palm Jumeirah’s trunk.

“We believe every project is unique in its own right and is backed up with some kind of business plan; if we don’t see a need, we won’t do a project,” he states.

Despite concerns in the market, the company has not dropped its prices and is continuing to post “healthy sales”.

“In terms of sales I have seen a change in the demographic of the investors – I’m seeing more end users – that’s a fact.What we have seen is maybe a decrease is speculator purchases. But overall sales, as far as we are concerned as a business, are as per our expectations… We are healthy and we have no problems in terms of numbers.”

He adds: “If there is a price drop, then it’s a correction which is natural in any market.”

The drop in oil prices this year has impacted Gulf economies, with regional governments feeling the strain of lower hydrocarbon revenues. Oil prices have fallen by over 50 per cent since June 2014 and are currently hovering at around $50 per barrel.

In a recent report, consultancy Cluttons warned that direct correlation between hydrocarbon revenues and state spending will put pressure on the rate of job creation. In turn, this will impact the rate of office space take up and subsequently the creation of households and overall residential demand.

Cluttons Middle East chief executive officer Steve Morgan tells Gulf Business: “The oil price drop is a concern. It’s a big elephant in the room really. The government is taking
steps in the right direction to make up for the lost revenues such as deregulating the fuel prices, taxing corporates – all steps that need to be taken to become a mature economy.

“The timing is a little unfortunate. The good thing is there are enough large infrastructure projects that they have already committed to and that will sustain the job creation.”

However, not everyone is worried.

UAE business magnate and Habtoor Group chairman Khalaf Al Habtoor says: “Our governments are not concerned about the oil price drop because we have lots of reserves and a good cash flow and plan.”

The company launched two new residential towers within its massive Habtoor City project during the event. The development will only target investors looking for ultra luxurious properties, with prices starting from Dhs 3m for one-bedroom units.

Similar thoughts are echoed by SPF Realty director Ranjeet Chavan, who claims the Dubai market has never been that dependent on oil. He suggests that reports about the market softening are not completely accurate.

“In the last 18 months, there has been a decline in prices but the rents are still stable. So this is the best time to buy.

“We see the property investors are still interested. They [property consultants] are not on the ground.”

Experts insist that despite an overall decline, Dubai is now a mature market and in the middle of a regular real estate cycle.“There’s no more bubble to burst – it already burst in 2009 and Dubai is now a very mature market,” explains property website realopedia’s managing partner Hamdi Osman.

A survey conducted by YouGov for Majid Al Futtaim Properties in the United Arab Emirates, Saudi Arabia and Oman found that up to 55 per cent of respondents plan to invest in real estate in the next two years or more.

The UAE topped the list of where investors would prefer to buy their property (59 per cent), followed by Oman (24 per cent) and Saudi Arabia (24 per cent). The deciding factor for all three markets was political and economic stability, the report found.

Dubai specifically remains attractive to investors because of the emirate’s bold ambitions in the run up to Expo 2020.

“I think if you look at the Dubai market, there are huge opportunities. It is still hugely cheap compared to other global markets such as New York, Hong Kong, France, Switzerland and the United Kingdom,” says realopedia chief executive officer Laura Choueri.

“There is always something happening here – the next new big project – which makes it an interesting haven to invest in.”

Many developers remain positive. Select Group CEO Rahail Aslam says he expects a rebound in the market over the next six to 12 months.

“The recovery in the market is linked to the global economy. I don’t think it is Dubai’s problem but a global growth issue. There are many economic factors in play. The market here still has transactions; on average we have 15 to 16 leads a month. Interest is still there but once sentiment changes and oil prices rebound it will come back,” he states.

The health of the market – whether it will bounce back, stabilise or slowdown – will certainly be apparent by Cityscape next year. In the meantime, investors and developers will be keeping their fingers crossed that the huge displays continue standing.