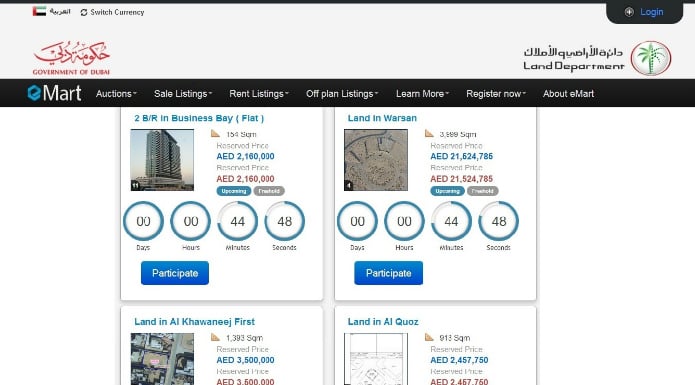 The official property portal of the Dubai Land Department, eMart, will hold its third property auction on Sunday, February 9, with five properties worth Dhs190 million on offer.

The auction features high-end commercial and residential properties and is the portal’s biggest one so far, the Land Department said in a statement.

Sultan Al Akraf, senior director of Real Estate Registration at Dubai Land Department said: “This is eMart’s third auction in less than two months, which shows the phenomenal demand for this service.”

“For our third auction we fully expect to raise the bar even higher and beat the previous records, epitomising our continued success in attracting high-end investors,” added Akraf.

The auction organisers say the portal is transparent, credible and inclusive. It provides a complete description of the properties, along with photographs, location maps and relevant details.

“Watertight procedures have been put into place to guarantee the security of all transactions, thus opening a gateway through which diverse participants can pursue their investment goals,” the statement said.

The Dubai Land Department anticipates an even greater level of participation from real estate players and stakeholders this time, it added.

The department has designated a space in one of its buildings for auctioneers and interested parties, with trained staff to assist bidders and train them in using the online auctioning system.

Dubai’s property market has been on a stellar rebound since 2013, with prices rising around 30 per cent on average. Several developers have launched a spew of new projects to meet increasing demand.

While the market is predicted to continue booming, experts such as the International Monetary Fund (IMF) have urged the emirate to ensure regulated growth to prevent the creation another property bubble.