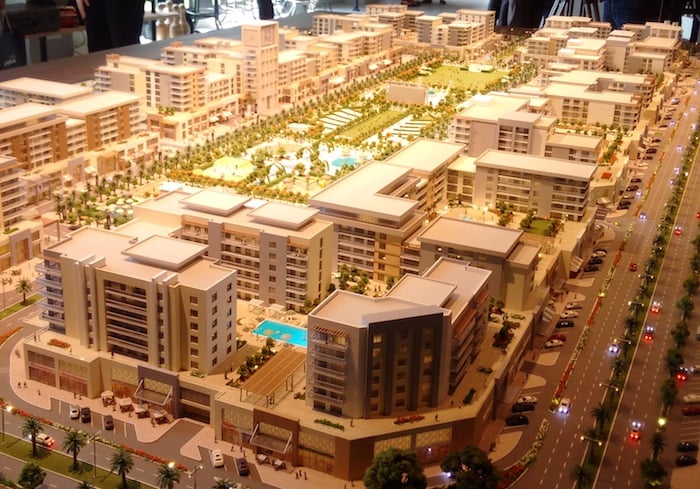 Dubai-based Nshama, the private developer which recently launched Town Square, a mega mixed use development in the emirate, announced that it has launched 300 units from the first phase for sale.

Three and four bedroom units in the Zahra Townhouses community, located on the northern side of the 750-acre development, will be priced from Dhs999,888 onwards, the company announced on Wednesday.

The three-bedroom units are spread across 200 to 208sqm, while the four bedroom townhouses are sized at 225sqm. The townhouses have a private rear garden, room for domestic help, open bistro kitchen layout and covered garage.

“Our aim is to target residents earning between Dhs20,000 to Dhs35,000 per month who are now renting property,” Fred Durie, CEO of Nshama, told reporters.

While not exactly within the cheap-affordable bracket, Durie insisted that the “high-quality” homes would be within reach for the middle-income population in the country who are seeking to own property.

The company has tied up with First Gulf Bank, Noor Bank and Abu Dhabi Islamic Bank to offer financing options to potential buyers. Payment plans are structured as 10 per cent down-payment with specific percentages to be paid upon construction.

He also confirmed that a further 700 townhouses would be launched for sale within the next couple of weeks, and that two and three bedroom apartments will be unveiled next month.

The first phase of the project is anticipated to cost around Dhs1 billion, Durie said, with delivery of the first units set to begin in Q3 or Q4 2017.

However, he refused to divulge the cost of the entire development. Nshama owns the entire 750-acre land, although officials did not reveal how the company acquired it.

Featuring 3,000 townhouses and 18,000 apartments, the overall Town Square development has been slated as a 10-year project, with roughly 3,000 units expected to be launched every year.

Located near the Al Barsha area, the development – the size of 16 football fields – will have around 600 retail outlets, hospitality and commercial units.

The development will feature one of the largest central parks in the world and a central fountain feature. Free wi-fi will be offered across the public areas.

Earlier this week, Nshama said that it has inked a deal with Vida Hotels and Resorts, a unit of Emaar Hospitality Group, to operate a lifestyle boutique hotel in the project.

Vida Town Square Dubai will have about 180 rooms and serviced residences and will overlook the central park.

Aside from Town Square, Nshama is developing another lifestyle project in Dubai through a joint venture with Mohammed bin Rashid foundation (MBRF).

Established in 2014, Nshama is one of the newest property developers in Dubai.  Durie, who was appointed in November last year to head the company, was previously the CEO of Emaar Properties International.

However, he denied that the company had a partnership or collaboration with any other developer.